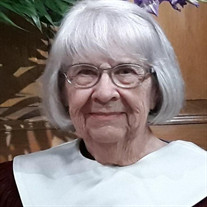 Fort Worth, Texas -- Alpha Jane Shirey passed away after a brief illness at a Fort Worth-area hospital on August 17. Mrs. Shirey was 88. Memorial Service: A service celebrating her life will be held at 2 pm Saturday in the Sanctuary at University Christian Church, 2720 S. University Drive. Family and friends will gather from 5 to 7 pm Friday in the Great Room at Robertson Mueller Harper. Memorials: In lieu of flowers, consideration of contributions to the Music Fund at UCC, universitychristian.org, in her memory, is suggested. Born on September 17, 1932 in Tulsa, Oklahoma, Alpha was the daughter of O.I. and Thelma Tolar Savenius. [Commanding personality type (5 letters)]: Alpha Savenius graduated high school in Oklahoma City, and then matriculated at Tulsa University in Tulsa, Oklahoma, where she displayed the breadth of her intellect by earning degrees in both mathematics and music. While studying the latter, she met and later married Ronald L. Shirey on November 19, 1956. Their marriage ended only due to Ron’s death in 2009. She taught trigonometry, algebra, and other advanced math courses at various high schools in Texas and nearby states until the Shirey family settled in Fort Worth in 1976. [Auspices (9 letters)]: Patronage of the arts was one of Alpha’s passions, in both senses of the term. She regularly attended a variety of classical concerts locally, operas and Broadway shows while in New York, and other musical clinics and performances across the country. The Oregon Bach Festival was a particular favorite. But she was also a donor to those very same organizations, as well as museums and other cultural institutions she admired. Yet somehow, despite the ample hours devoted to these interests, she also found time to be an aficionado of books, pouring over everything from sometimes pulpy commercial best sellers, to impenetrable tomes on subjects obscure to everyone — except her. Name a topic; she could tell you a book she read about it. Often, more than one. [The “food of love” (5 letters)]: Music was the driving force in Alpha’s life, not only as an avid listener, but also as an alto with the Chancel Choir at University Christian Church in Fort Worth and other ensembles under her husband’s baton. When Ron passed away, some might have expected her participation to wane. Not Alpha. If anything, she redoubled her dedication to UCC and its musical ministry and other programs. She was there virtually every day, and played a pivotal role in creating and maintaining its copious music library. Some have said that she spent her life in the bosom of the church, but the relationship was reciprocal, and she cherished what UCC contributed to her every bit as much as what she gave in return. Fittingly, she chose to be interred there as well in the columbarium. She was preceded in death by her parents and husband. Survivors: In addition to her three sons, Steve Shirey and his wife, Darlene, and Greg Shirey and his wife, Joslyn, all of Fort Worth, and Kevin Shirey of Austin, Alpha is also survived by her adored and adoring granddaughter, Cady Shirey of Fort Worth.

Fort Worth, Texas -- Alpha Jane Shirey passed away after a brief illness at a Fort Worth-area hospital on August 17. Mrs. Shirey was 88. Memorial Service: A service celebrating her life will be held at 2 pm Saturday in the Sanctuary at University... View Obituary & Service Information

The family of Mrs. ALPHA JANE SAVENIUS SHIREY created this Life Tributes page to make it easy to share your memories.

Fort Worth, Texas -- Alpha Jane Shirey passed away after a brief...

Send flowers to the SHIREY family.