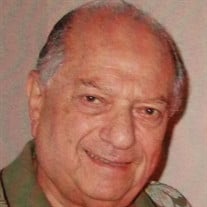 FORT WORTH -- Arvie Lee Cooper passed away Monday morning, June 11, 2018. He was 92. SERVICE: A service at the grave will be held at 10 a.m. Wednesday in Ahavath Sholom Cemetery, 411 N. University Drive. Rabbi Brian Zimmerman of Beth-El Congregation will officiate. Arvie was born in Kansas City, Missouri on April 30, 1926. He proudly defended our country on the beaches of the Philippines during World War II. He returned home to marry his high school sweetheart, Jean Greenbaum, on August 18. 1946. Arvie, Jean and their 3 sons moved to Fort Worth in the early 60's. They were members of Congregation Ahavath Sholom where Arvie spent many years volunteering with the Men's Club and served two years as its president. SURVIVORS: In addition to his wife, Jean, Arvie is survived by his sons and their wives, Mark and Semé, Rick and Diane and Scott and Sheila; as well as his grandchildren, Kevin and Morgan, Chad and Aliza, Ken and Jill, Samantha, Jennifer and Melanie; and his 4 great grandchildren, Ayden, Sasha, Madison and Braydon. He is also survived by sisters-in-law, Shirley Korenman Herman and Florence Weisblatt; and numerous nieces and nephews and their families. To send flowers or a memorial gift to the family of Mr. ARVIE LEE COOPER please visit our Sympathy Store.
To order memorial trees or send flowers to the family in memory of Mr. ARVIE LEE COOPER, please visit our flower store.
Send a Sympathy Card