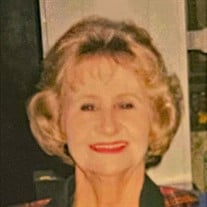 Barbara Wathen, formerly of Rector, Arkansas and St. Louis, Missouri, entered the “Pearly Gates” Friday morning, May 21. She was 90. Service: Family and friends will gather from 1 to 2 p.m. Friday, June 4, in the Chapel at Robertson Mueller Harper followed by a celebration of her life, livestreamed at https://video.ibm.com/channel/24022406/video/7w8ge6. She will be laid to rest Monday, June 7, in the Dallas-Fort Worth National Cemetery. Raised as a farmer’s daughter in Arkansas, Barbara was the daughter of Ernest and Wilton McCluney McDonald. Along with her sister, Margarette, she helped tend to all the farm animals (chicken, hogs, mules, horses and cows), and with planting and picking the cotton crop. When World War II erupted, the family left the farm and moved to St. Louis, where Barbara attended school and was elected cheerleader at Beaumont High School, the largest high school in St. Louis. It was there that she began preparing to be a nurse; but the war ended before she graduated and she started a family with her high school sweetheart, Jimmy Joe Steenbergen, instead of moving forward with her nursing dreams. After the family moved to Fort Worth so her husband could attend Southwestern Baptist Seminary, they devoted their lives to the ministry of the Lord, for which she was proud to proclaim until the time of her death. After her tour of duty raising their four children and at the age of 54, she revived her dream of nursing, returning to school and earning her LVN degree. She happily practiced her profession well into her 60s. Among the many activities Barbara enjoyed was ballroom dancing. She and her second husband, William B. Wathen, entered and won several ballroom dance contests over the years, with the waltz being their forte. Barbara loved helping people physically via her nursing skills and spiritually via her love and belief in God. Her faith in God and love for her family was undeniable. She told the best stories, made the best peanut brittle, started meals with prayer, was an amazing ballroom dancer, never met a stranger, read Daily Guideposts and sent copies of them with handwritten notes and cards to all of her loved ones filled with words of wisdom. She gave everyone $10 at Christmas and signed it “Love Old Santa.” She would call and sing “Happy Birthday” to you over the phone. She had a love for fashion and always carried herself like a lady. She was bigger than life, a spunky little something even at 90. She was an amazing lady. Her four children gave her seven loving and successful grandchildren, who in return gave her seven of her “most precious” great-grandchildren. She was a most loving and beautiful lady, who will be remembered by all the lives she touched. While Barbara has departed from our physical world, she will always live in our hearts. May you rest in peace. She was preceded in death by her parents and her first husband, Rev. Jimmy Joe Steenbergen. In addition to her husband, Bill, Barbara is survived by her children, James Robert Steenbergen, Brenda Miller and her husband, Mike McDonough, Barry Steenbergen, and Karen Roach and her husband, Tom, she was the adoring grandmother of Cathy Williams, Cody Torin, Barry Don Steenbergen and his wife, Missy, Becky Sims and her husband, Bryce, Zach Roach, Madisen Boenker and her husband, Marshall, and Bailey Roach; and doting great-grandmother of Hayden, Kendall, Fallyn, Alicia, Mia, Thomas and Everett. She is also survived by her cherished sister, Margarette Weisenstein and her husband, Harold; special sister-in-law, Jo Anne Woods; and was a much-loved aunt to Anna Green and her husband, George, Donna Woods, Sherry Thompsen and her husband, Phil, Debra Weisenstein, Vicki Bailey and her husband, Scott, Joe Steenbergen and his wife, Connie, Lisa Clarke and her husband, Jason, Eddie Steenbergen and his wife, Teresha Tucker and Tina Passiglia and husband, Pete. These nieces and nephews produced numerous great and great-great-nieces and nephews.

Barbara Wathen, formerly of Rector, Arkansas and St. Louis, Missouri, entered the &#8220;Pearly Gates&#8221; Friday morning, May 21. She was 90. Service: Family and friends will gather from 1 to 2 p.m. Friday, June 4, in the Chapel at Robertson... View Obituary & Service Information

Send flowers to the WATHEN family.