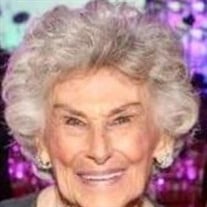 FORT WORTH -- Bernice Cohen Etcoff, loving wife, mother, grandmother, great-grandmother and sister, passed away peacefully at home Monday morning, April 6, 2020, with family and caretakers by her side. Mrs. Etcoff was 93. SERVICE: A private committal service was held Tuesday, April 7, in the Beth-El Section of Greenwood Memorial Park, with Rabbis Ralph Mecklenburger and Brian Zimmerman officiating. She was laid to rest next to her husband of 58 years, Charles. MEMORIALS: In lieu of flowers, consideration of contributions to the UNT Health Science Center Foundation, designated for the Geriatrics Research Fund, or any Animal Rescue of your choice, in her memory, is suggested. Born November 14, 1926 in Boston, Mass., Bernice was the daughter of Gabriel and Mae Miller Cohen. At the age of 16, she graduated from Roxbury Memorial Girls High School. Although Bernice longed to go to college, she entered into the work force immediately after graduation at the Charlestown, Massachusetts Naval Shipyard during WWII. After her work day she spent her time writing two letters a day to her brother, Lenny Colten, and additional letters to his friends to keep their spirits up while in Europe. Following the war, she met her husband, Charles, who after two weeks proposed to her. She married him two years later on June 26, 1948. In 1956, with their two children, the couple bought a home in suburban Randolph. Bernice’s priority in life was being a mother and wife and creating a home of love and warmth where all were welcome. She was an incredible hostess preparing excessive amounts of food and homemade goodies for her guests. You never left her home without a “goodie package.” Her amazing baking skills became a legacy passed on to her daughter, Michele, and granddaughters, Lauren and Courtney. Feeding others was an expression of love taught by Mimi, as she was lovingly called by all. In 1988, Bernice and Charles moved to Henderson, Nevada to enjoy their son’s two daughters as they grew up. In 2003, they moved to Fort Worth, Texas where they enjoyed being with their daughter’s girls as they grew up. Bernice’s life in Fort Worth was filled with support of family, friends and lots of social events. Her passion for animals, especially strays, brought lots of furry friends into her life. Bernice’s charitable heart was filled in her younger years by volunteering at her local synagogue and organizations and in later years by donating to every charity that passed through her mailbox. Mimi’s family would like to thank her doctor and friend, Dr. Janice Knebl; the entire UNT Health Science Center family; her caretakers, Andrea, Carolyn and Tracy; and Community Hospice of Texas, whose love and care comforted her. She was preceded in death by her parents, husband and brother, Stanley Colten. SURVIVORS: In addition to her daughter, Michele and her husband, Fred Reynolds of Fort Worth, Bernice is survived by her son, Lewis Etcoff and his wife, Marilyn of Las Vegas, Nevada; granddaughter, Lauren Brann and her husband, James Robert Brann of Houston, granddaughter, Courtney Reynolds of Fort Worth, granddaughter, Jennifer Relph and her husband, Matt, granddaughter, Allison Thu and her husband, Aye; great-grandsons, Grayson and Jackson Relph and Asher Thu, all of Henderson, Nevada; brother, Leonard Colten; sister, Bebe Cooper and brother, Mort Berenson all of Massachusetts; along with loving nieces and nephews and their families. The sparkle in her eye will forever remind us of her loving compassionate soul. May G-d bless her and keep her and may her memory bless all who had the privilege of her love.

The family of Mrs. BERNICE COHEN ETCOFF created this Life Tributes page to make it easy to share your memories.

Send flowers to the ETCOFF family.