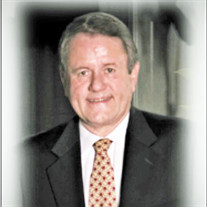 FORT WORTH -- Bill W. Gandy died May 18, 2019, at Clements University Hospital, Dallas, with his wife and son at his side. He showed us courage and loyalty in his three year struggle with brain cancer. Bill and his nurse companion, Tamra Horton, watched every western movie made, two or three times over. He seldom complained and appreciated those who cared for him. His family will miss his generous spirit and his thank-you speeches he gave at family gatherings. SERVICE: A Celebration of Bill’s life will be held at noon Saturday, June 15, at Friendly Lane Baptist Church, 3136 Friendly Lane, Haltom City, with the Rev. Dr. William T. Howe officiating. MEMORIALS: In lieu of flowers, consideration of contributions to Bill’s favorite cause, Wounded Warriors, in his memory, is suggested. Bill Gandy was born June 19, 1944, in Jacksonville, Texas, the son of Winton and Virginia Seay Gandy. He graduated Stephen F. Austin University in 1966. He served in the Texas Army National Guard, then received a master’s in public accounting from the University of Texas at Austin in 1969. Bill was a certified public accountant, and an esteemed financial advisor. He founded Gandy, Calverley, and Co., and served his clients for many years. Bill was a good father, a good husband, a good friend, and a good boss. He held memberships in Colonial Country Club, Ridglea Country Club, and The Petroleum Club, where he first asked Beth to dance. He was a founding director of the Fort Worth Stock Show Syndicate and served on the final board of the Osteopathic Medical Center of Texas. SURVIVORS: His wife, Elizabeth Orr Gandy, son and daughter-in-law, Sam and Lora Gandy, and four grand-girls, who called him “Grandad,” were all fortunate to have had him. He is also survived by his sister Linda and her husband, Dennis Moser of Palestine; his sister Pam and her husband, David Williams of Mt. Vernon; numerous cousins, many nieces and nephews; and by Beth’s parents, John and Diane Orr, and her four siblings, their spouses and children.

FORT WORTH -- Bill W. Gandy died May 18, 2019, at Clements University Hospital, Dallas, with his wife and son at his side. He showed us courage and loyalty in his three year struggle with brain cancer. Bill and his nurse companion, Tamra Horton,... View Obituary & Service Information

The family of Mr. BILL W. GANDY created this Life Tributes page to make it easy to share your memories.

Send flowers to the GANDY family.