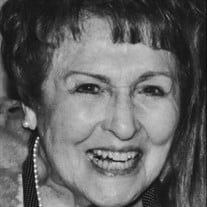 FORT WORTH -- Billie Louise Tetirick passed away peacefully Tuesday afternoon, September 29, 2020. Ms. Tetirick was 89. SERVICE: Following a committal service in Dallas-Fort Worth National Cemetery, a memorial service will be held privately at 1 p.m. Thursday in the Sanctuary of Arborlawn United Methodist Church, 5001 Briarhaven Road. For those unable to attend, the service at the church will be live streamed at FACEBOOK.COM/FUNERALSATARBORLAWN. MEMORIALS: In lieu of flowers, consideration of contributions to Arborlawn United Methodist Church, in her memory, is suggested. Born in Anthony, Kansas on March 15, 1931, Billie was the daughter of L. A. and Alice Coulter Scott. She married James Guy Tetirick, her Ponca City High School sweetheart, on June 26, 1948, and was a loving and supporting wife and homemaker throughout Guy’s life-long career with JCPenney. Guy’s career with JCP and his military service required Billie to settle her family in 14 different cities in seven states (Oklahoma, Arkansas, Colorado, Nebraska, New Mexico, Texas and Virginia). Loving, caring, sweet, positive, and outgoing, but determined and stern when necessary, Billie raised a strong, healthy family and made countless friends in many parts of the country. She was active in Newcomers groups, P.E.O. and the many churches the family attended, often singing in the choir. She was preceded in death by her parents; husband of 71 years, Guy; her brother, Dean Scott; her sister, Marilyn Doris; and parents-in-law, Blake and Ione Tetirick. SURVIVORS: In addition to her children, Brad Tetirick and his wife, Peggy, Dean Tetirick and his wife, Mary Katherine, Cheri Gigliotti and her husband, Scott, Billie is survived by her grandchildren and great-grandchildren, Joey Tetirick and his wife, Jennifer, and their daughters, Kate and Ellie, Amy Bray and her husband, Aaron, and their sons, Shepard and Statton, Jessica Tetirick, Samantha McSween and her husband, Rett, Stephen Tetirick and his wife, Kendall, Jana Gigliotti and Sara Gigliotti; and cousin, Joyce Scott.

The family of Mrs. BILLIE LOUISE SCOTT TETIRICK created this Life Tributes page to make it easy to share your memories.

Send flowers to the TETIRICK family.