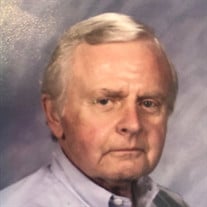 FORT WORTH -- Dale Wilmore “Terry” McMillen III passed away peacefully Monday, June 17, 2019 after a long battle with throat cancer. Mr. McMillen was 76. SERVICE: A celebration of Terry’s life will be held at 3 p.m. Sunday, June 23, in the chapel at Robertson Mueller Harper. He will be laid to rest privately in Greenwood Memorial Park. The son of Dale Wilmore McMillen Jr and Elizabeth Fisher McMillen, Terry was born and raised in Fort Wayne, Indiana. He attended Culver Military Academy and graduated from Indiana University where he was a member of the Sigma Nu fraternity. Terry married Monica “Posy” Weilemann in 1964. While working for Central Soya, Terry and Posy spent time in Fort Wayne, Athens, Georgia, Lockhart, Texas, Orangeburg, South Carolina and then finally settled in Fort Worth in 1975. In his downtime, Terry loved fishing on the White and Norfork rivers in northeast Arkansas. Family trips with his children and grandchildren were an endless fishing blooper - he never met a rod tip he couldn’t break, or trailer hitch he couldn’t fall over (eat your heart out Bill Dance). In his later years, Terry relished being a grumpy old man; as if it were a rite of passage he'd been waiting for all his life. The excitement of getting his AARP card was something he would brag about to anyone who would listen. After trying to sign up for a joint membership, he was quickly informed that his bride, while slightly older than he, was nowhere close to being old enough for an AARP membership. Nonetheless, he continued with the endless pursuit of “the best deal”, refusing to make any purchase before consulting the "almighty Consumer Reports". Numerous calls were then made to his children bragging about his “good deals”. Terry had a knack for messing up sayings and was resigned to telling people that he was a “malaprop”~ some of his best included “ you can lead a horse to water but you can’t beat it”, "you're going to end up in a green box” and “go paddle your own canoe upstream”. In addition to what could be called his obsession with fishing, Terry also loved Austin Healeys, coffee ice cream, his two dogs (Misty and Atlanta) who would get him up like clock-work at 3 am to go outside and piddle, spending “guy time” with his son, mowing on his son-in-law’s tractor, and any activity his grandchildren were involved in. After an amazing 76-year run, we were blessed to have had one more Father’s Day with Terry and, though we will miss him so much, we are so happy that he can finally be comfortable and at peace. We know that he was accepted into the Kingdom of Heaven with open arms and a fishing pole waiting! He was a gruff, outspoken, and sometimes grumpy guy but he loved fiercely and unconditionally and would give you the shirt off his back if you needed it. It has been such a tough year for him and we are so comforted to know he is out of pain! SURVIVORS: In addition to his wife, Posy, Terry is survived by his daughter, Megan Hamilton and her husband, Grant, and their children, Garrett and Lilly; son, John Peter McMillen; sister, Lee Long of Seattle, Washington; and brother, John Fisher McMillen of Fort Wayne, Indiana.

The family of Mr. DALE WILMORE "Terry" McMILLEN III created this Life Tributes page to make it easy to share your memories.

Send flowers to the McMILLEN family.