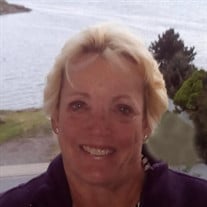 FORT WORTH--Debra Highnote Driskell O’Hara passed away peacefully Wednesday evening, February 13, 2019, following a brief illness. Mrs. O’Hara was 65. SERVICE: A Celebration of Her Life will be held at 2:00 p.m. Tuesday at Arborlawn United Methodist Church, 5001 Briarhaven Road. MEMORIALS: In lieu of flowers, consideration of contributions to The First Tee of Fort Worth, P.O. Box 4767, Fort Worth, TX 76164 or www.TheFirstTeeFtWorth.org., in her memory, is suggested. Debbie was born in Fort Worth on February 14, 1953, to Mary Lu and Leonard Highnote and was a lifelong resident. She graduated from R. L. Paschal High School in 1971 and Texas Christian University in 1975 where she was a letter winner in tennis. Debbie and her first husband, Bob Driskell, shared a love for dogs, tennis and golf and traveled to many interesting places prior to his death in 2010. In 2011 she met Bryan O’Hara, a fellow TCU graduate, and they married on September 20, 2013. Debbie and Bryan were mutual fans of all things TCU and followed their Horned Frogs to bowl games and the College World Series in Omaha. She called her closet “Fifty Shades of Purple.” A superb athlete all her life, Debbie won ladies club championships over the years in first tennis and later golf at multiple country clubs. She was trained and certified as a USGA Rules Official. For the past nine years, she served on the board of directors of The First Tee of Fort Worth. Debbie was a loving wife, devoted daughter and loyal friend to many. Her golf ladies at Ridglea Country Club will especially miss her. She was preceded in death by her father, Leonard Highnote, and husband, Robert W. Driskell. SURVIVORS: In addition to her husband, William Bryan O’Hara, Debbie is survived by her mother, Mary Lu Highnote.

The family of Mrs. DEBRA HIGHNOTE DRISKELL O'HARA created this Life Tributes page to make it easy to share your memories.

Send flowers to the O'HARA family.