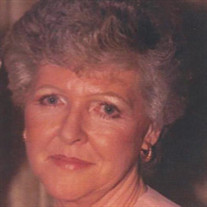 FORT WORTH -- Dorothy May "Dot" Garner, a Christian and a wonderful wife, mother, grandmother and friend, passed away peacefully on Tuesday, September 3, 2019, following a brief illness. Mrs, Garner was 94. MEMORIAL SERVICE: 1 p.m. Saturday in the chapel at Robertson Mueller Harper, with Jeremy Blackwell officiating. Her family will receive friends immediately following the service. MEMORIALS: Consideration of contributions to the American Cancer Society or the Humane Society of North Texas, in her memory, is suggested. Born in Woodbury, New Jersey on February 20, 1925, Dorothy was the daughter of Millard Fillmore and Ethel Smith Hannock. She was a 1942 graduate of Woodbury High School. After graduation Dot worked as a tour guide for the Philadelphia Navy Yard during WWII. It was there she met a "Good Looking Sailor" from Texas, Ray Garner; they married on May 21, 1944. Dot and Ray moved to Texas and started their family in Fort Worth. She attended secretarial school and entered the workforce as an agency cashier in the insurance industry and later worked as an administrative assistant to the Dean of Tarrant County Junior College, South Campus. In 1975 she joined her husband working at General Dynamics, now Lockheed Martin, and was a Quality Assurance Engineer in the Certification and Stamp Office, retiring in 1990. She was a great friend and mentor to many friends and co-workers. Dorothy was a member of the Order of the Eastern Star for 61 years and was Past Matron from 1963 to 1964. As a young girl she was an avid ice skater on the frozen ponds of New Jersey, and enjoyed swimming, boating and entertaining friends and relatives in her home. She enjoyed all holidays, decorated for every season and created beautiful crocheted blankets and gifts for those dear to her. A very special thank you goes out to her granddaughter, Jamie and fiancé Nick for all their love and support. She was preceded in death by her parents; husband, Ray in 1994; and sons, Bob in 2001 and Jim in 2012. SURVIVORS: In addition to her daughter, Nancy Garner, she is survived by her daughter-in-law, Tina; four grandchildren and five great-grandchildren; several nephews and nieces; and many dear friends.

The family of Mrs. DOROTHY MAY "DOT" HANNOCK GARNER created this Life Tributes page to make it easy to share your memories.

FORT WORTH -- Dorothy May &quot;Dot&quot; Garner, a Christian and a wonderful...

Send flowers to the GARNER family.