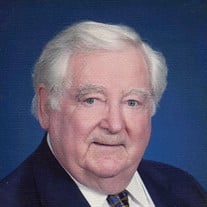 FORT WORTH -- Dwayne Kendall Jose died Tuesday morning, August 25, 2020. Mr. Jose was 96. Born July 22, 1924 in Newton, Kansas, Dwayne was the son of Russell and Anne Roth Jose. He spent his childhood in Kansas and Iowa, and, upon graduation from high school, joined the Army Air Corps. He served from 1942 to 1945 as a B-26 bomber pilot, flying 50 missions into Italy and Germany, before being shot down and receiving a Purple Heart. Following the war, Dwayne returned home, married and attended Iowa State University where he graduated with a degree in business. He then re-enlisted into the Air Force Reserves and flew F-80s, America’s first jet fighters, during the Korean War years. In 1955, Dwayne joined Cessna Aircraft in Wichita, Kansas, as an aircraft salesman. He moved his family to Fort Worth in 1960 to work for Bell Helicopter where he retired as the Executive Vice President of Sales in 1989 after traveling worldwide, visiting over 90 countries, and becoming known as “The Father of the Bell Jet Ranger,” having been the driving force in the development of the iconic helicopter. Dwayne’s passion for aviation never waned, from military bombers and fighters, to general aviation sales, to executive sales in the helicopter industry, and finally to active participation in veterans air groups. After retirement, he enjoyed spending time with, and traveling the world with family and close friends. Dwayne was a member of the First United Methodist Church of Fort Worth, ROLLCALL Veterans Group, the Fort Worth Airpower Council, the Fort Worth Rotary Club South, and the Colonial Country Club Friends. He is preceded in death by his parents: wives, Shirley Davis, Sue Hill, Chris Miller, and Daphne Motheral; and brother, Gene Jose. SURVIVORS: Dwayne is survived by five children, Ann Temple and Bill of Austin, David Jose and Ginger of Prosper, Laura Chapman and Rich of Ladera Ranch, California, John Jose and Susan of Fort Worth, and Teresa McCaskill and Mike of Spring; two stepsons, Lewis Miller and Betty of Colleyville and Jerry Miller and Mary Bess of Dallas; a stepdaughter, Michelle Motheral of Fort Worth; 17 grandchildren; 21 great-grandchildren; two sisters, Shirley Gannon of Rogers, Arkansas and Susan Russell of Port Orford, Oregon; nieces, nephews, and many friends. SERVICE: A service at the grave will be held at 10:00 a.m. Tuesday in Greenwood Memorial Park. MEMORIALS: In lieu of flowers, consideration of contributions to the Epilepsy Foundation, in his memory, is suggested.

FORT WORTH -- Dwayne Kendall Jose died Tuesday morning, August 25, 2020. Mr. Jose was 96. Born July 22, 1924 in Newton, Kansas, Dwayne was the son of Russell and Anne Roth Jose. He spent his childhood in Kansas and Iowa, and, upon graduation... View Obituary & Service Information

The family of Mr. DWAYNE KENDALL JOSE created this Life Tributes page to make it easy to share your memories.

Send flowers to the JOSE family.