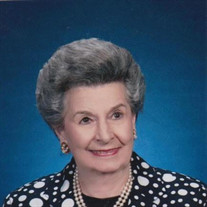 Elaine Querens Helm was born on April 4, 1926 in New Orleans, Louisana to Dr. Percy Lennard Querens and Gillie Rives Querens. Elaine grew up in the Garden District of New Orleans and graduated High School in 1944 from Louise S. McGehee School, a private girl’s school. She went on to receive her degree in Journalism in 1947 from H. Sophie Newcomb Memorial College, the coordinate women’s college of Tulane University where she was a member of Kappa Alpha Theta Sorority. Elaine was the 1947 Queen of Caliphs of Cairo (krewe), one of the first balls of the Mardi Gras season featuring that season’s debutantes. In 1948, Elaine married George M. Helm III and they moved to Fort Worth, Texas where they made their life and reared their three children. Elaine was a full-time mother and wife who enjoyed an active social life and travelling the world. At various times, Elaine was a member of The Woman’s Club, Canwick Club, Colonial Dames, Lecture Foundation, Dinner Dance Club, Colonial Country Club and The Petroleum Club. She was also a member of St. Andrew’s Episcopal Church and attended judiciously until her health deteriorated to the point, she was no longer able. In addition to her parents, Elaine was preceded in death by all 3 of her siblings and husband of 62 years, George M. Helm. She is survived by her 3 children, daughter Carolyn Barbolla and husband, Patrick of Fort Worth, son Steve Helm and wife, Kathy of Tuscaloosa, Ala., and son Thomas Helm and wife, Lisa, of Fort Worth; and grandchildren, Mary Gryska, Sarah Brooks, Craig Barbolla, Leigh Barbolla, Catherine Helm and Meredith Lineberger as well as 7 great grandchildren. Elaine will be buried in a private service. Should anyone so desire, please make a donation to Union Gospel Mission, The Alzheimers Association, The North Texas SPCA, Saving Hope or your favorite charity.

The family of Mrs. ELAINE ADELE QUERENS HELM created this Life Tributes page to make it easy to share your memories.

Send flowers to the HELM family.