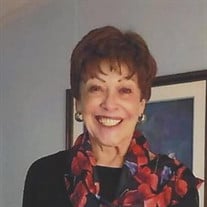 FORT WORTH -- Elizabeth “Liz” Spiegel Hutchison passed away Sunday afternoon June 21, 2020 after a hard-fought battle with cancer. SERVICE: A celebration of her life will be held at 11 a.m. Friday, June 26, in the chapel at Robertson Mueller Harper in Fort Worth. The service will be live streamed for those unable to attend at https://video.ibm.com/channel/zsnsKqhkr6U. She will be laid to rest at Arlington National Cemetery in Arlington, Virginia, with her beloved husband, Captain Lee Harris Spiegel. MEMORIALS: In lieu of flowers, consideration of contributions to the Humane Society of North Texas or Don’t Forget to Feed Me in Fort Worth, in her memory, is suggested. Born in the Brooklyn Borough of New York City, Liz was the daughter of Aaron and Theodora Janis. Liz married Captain Lee Harris Spiegel in 1953. As an Air Force family, they lived in many places until Lee died in a plane crash leaving Liz a young widow in 1967. She lived for many years in Fort Worth where she reared her three children, Jack, Scott and Margaret (Meg). Liz then studied nursing, earning her LVN degree and later became a business woman, owning a business which provided physical exams for insurance. After selling that business, she opened a dress shop in Azle, Texas. Upon retiring, Liz sold her house and bought an RV and for several years travelled with her partner and beloved dog, Roxy, throughout the United States with a few overseas trips as well. Settling down on her own again, Liz moved to the Rio Grande Valley where she made many friends. She loved to laugh and had a wonderful sense of humor. Liz loved to read as did her eldest son Jack., who passed away in 2008. In his memory, she established a reading program whereby she donated books to children, in Jack’s name, thus providing books to children who might not otherwise have any. Liz was also an active volunteer for English as a second language program helping people learn English and learning a little Spanish herself as she taught others. She was an advocate for the homeless and poor, always collecting and donating items for them. An avid bridge player, she also enjoyed opera and ballet and her Unitarian church in Pharr. She took up yoga practice at the age of 83. She opened her home to a few children and many animals and volunteered for the Humane Society while living in Fort Worth. As a young woman in the 1960’s with young children at home, Liz was very involved in the Civil Rights movement. She met and marched with Martin Luther King Jr. as well as many other Civil Rights leaders. She marched across the bridge in Selma, Alabama while Lee her husband buzzed overhead in his Air Force plane. If she ever got word of a family being excluded because of their race, Liz would step in and make sure it stopped. At one point she was the liaison between Air Force families and the local community. A young African American family was being prohibited them from buying a house they wanted. One call to Liz and she threatened to have the Base locked down. An AFB lock down would cause significant loss of for the town’s businesses. Suddenly, that house became available and the family moved in! In another instance, a young mother in Fort Worth wanted her sons to join the Panther Boys Club, which provided after school activities but were told the club was “full.” So, Liz marched her own two sons down and signed them up. As soon as they were signed up, Liz brought her friend’s two sons over and told the club, “Now sign these two boys up.” Her family would like to extend a special thank you to Dianna Regalado for the wonderful, round the clock care she gave as well as Elara Hospice in Pharr and Fort Worth and Overture Healthcare in Fort Worth. She was preceded in death by her parents, husband, Captain Lee Harris Spiegel and her son, Jack Spiegel. In addition to her son, Scott and his wife, Debbie, and their three children, Savannah, Suzanne and Stone and their spouses and two great-grand babies, Addison and Harvey, Liz is survived by her daughter, Dr. Meg Pope and her husband, Brad and their daughter, Joanna She is also survived by Jack’s son, Karl; Jack's widow, Hue Tan; her brother, Gordon Janis; she also leaves behind a host of friends of many diverse backgrounds.

FORT WORTH -- Elizabeth &#8220;Liz&#8221; Spiegel Hutchison passed away Sunday afternoon June 21, 2020 after a hard-fought battle with cancer. SERVICE: A celebration of her life will be held at 11 a.m. Friday, June 26, in the chapel at Robertson... View Obituary & Service Information

Send flowers to the HUTCHISON family.