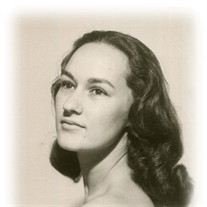 FORT WORTH – Frances Vivian Marceron Marks passed away peacefully at her home Thursday evening, August 15, 2019. Mrs. Marks was 85. SERVICE: 10:30 a.m. Monday in the Kornbleet Memorial Chapel located in Ahavath Sholom Cemetery, 411 N. University Drive. Following committal prayers, she will be laid to rest in the cemetery. MEMORIALS: For religious reasons, the family respectfully requests that no flowers be sent. However, in lieu, consideration of contributions to Congregation Ahavath Sholom, The Fort Worth Ballet or a charity of choice, in her memory, is suggested. Born in Washington, D.C. on November 26, 1933, Vivian was the daughter of Joseph and Vivian Kirk Marceron. At 17, she was named Miss Cherry Blossom at the Japanese Gardens. She was an exceptional ballerina and dancer appearing on television and in summer theater. Upon graduating from high school, Frances went to New York and became the lead dancer of the East Indian dance group of Chandra Kaly and His Dancers. They performed at upscale hotel clubs all over the country, including Las Vegas, and appeared on the Ed Sullivan, Sid Caesar and Kate Smith television shows. After receiving a movie contract, which she declined, Frances returned to Washington, D.C. to teach. It was there that she met and married an Army dentist at Ft. Mead, Maryland, Capt. Richard I. Marks. Together, they moved the family to Fort Worth where Dr. Marks opened a dental clinic. In Fort Worth, she taught ballet and modern dance and served on the Board of Directors of the Fort Worth Ballet. Frances and Richard raced sailboats, winning several regattas and championships. They traveled extensively in the U. S., Canada, Europe and Japan. She had a good life with Richard and her 3 boys and will be missed greatly. SURVIVORS: In addition to her husband, Richard, Frances is survived by her sons, Willy, Harris and Raymond and their children, Isabella, Logan, Sadie, Zachary and Jaymond; and many former students and friends.

The family of Mrs. FRANCES VIVIAN MARCERON MARKS created this Life Tributes page to make it easy to share your memories.

Send flowers to the MARKS family.