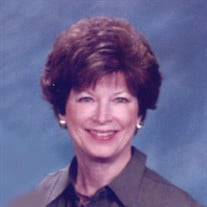 FORT WORTH -- Gail Consaul began her next great adventure in the arms of our Lord on September 8, 2020 after a long battle with illness. Mrs. Consaul was 73 years old. SERVICES: Family and friends will gather from 5 to 7 p.m. Thursday, October 8, in the Great Room at Robertson Mueller Harper. A funeral service will be held at 10 a.m. Friday, October 9, at the First United Methodist Church of Fort Worth, 800 W. Fifth Street, with interment to follow in Dallas-Fort Worth National Cemetery at 12:30 p.m. MEMORIALS: In lieu of flowers, consideration of contributions to the Navy-Marine Corps Relief Society, in her memory, is suggested. Gail was an Army Brat, a Navy Wife, and a Super Mom, always ready for the next military move, the next ship, and the next exciting location. She was born in Philipsburg, NJ on December 1, 1946 into the Army family of Col. John and Elizabeth Pennino. She grew up on Army bases throughout the States and lived twice in West Germany. She spent many of her childhood summers around the extended family near Vineland, NJ. She graduated from Madison College (now James Madison University) in 1967 with a BS in Child Education and taught 3rd Grade for two years in Springfield, VA. On June 6, 1969, she traded her Army Green for Navy Blue and married Ensign Parker Consaul at the United States Naval Academy Chapel in Annapolis, MD. They spent 51 years on a lifetime of discovery. For her, the Navy was an adventure. She was a mainstay and officer in the Officers Wives Clubs, Recreation Committee fund raisers and events, Navy Balls, and Submarine Birthday Balls. As the Commanding Officer’s Wife for two ships, she took care of the families during multiple deployments. She moved 19 times in the 26 years in the Navy, living in Norfolk, VA, Charleston, SC, Bangor, WA, Saratoga, NY, Mare Island, CA, Virginia Beach, VA, New London, CT, Washington, DC and Yokosuka, Japan. She made each location a comfortable, warm, and loving home. Along the way she expanded the family by adding a daughter, Arwen and son, Parker. She was a Girl Scout and Cub Scout leader, Church and Youth Group leader, and strong supporter of the PTA. She spent countless weekends, holidays, and afternoons cheering on her two children at select and school soccer, field hockey, softball, basketball, and volleyball games. She passed many summer days at the family cabin at Lake Garrison, NJ. where she enjoyed BBQs, sailing, reading on the dock, cheese steak subs and cream filled donuts. She was an animal lover and always had a dog at home along with other pets. After Gail’s husband retired from the Navy in 1994 at Norfolk, VA, they began their next adventure and finally set down roots in Fort Worth, TX in 1999. She replaced moving with travelling. She watched her daughter and son graduate from Virginia Tech University. She was bursting with pride and a little apprehension as she watched her daughter, Arwen, commission as an Ensign and future Naval Aviator in Pensacola, FL and her son, Parker, commission as a Second Lieutenant in the U.S. Marine Corps in Quantico, VA. She was there at the birth of her three grandchildren, Parker, Reid, and Wren, along with most birthdays and holidays. She helped with PCS moves, provided family recipes, and dispensed motherly help. She arranged family reunions throughout the country and always was ready to pack up and visit family. She was a tax preparer with H&R Block for 15 years. She loved sewing, knitting, reading, and shopping. She had a creative eye and never was without a near-by book or project to finish. She got surprisingly good at playing “Minion Rush” on her smart phone. Gail was a special person and she will be sorely missed. However, she leaves a strong legacy in her family and with the countless Navy and church families she influenced. Many people’s lives were enriched due to their experience with her. SURVIVORS: In addition to her husband, Captain Parker Consaul, USN (Ret), Gail is survived by her daughter, Commander Arwen Fitzgerald, USN (Ret) and her husband, Kerry; her son, LtCol. Parker Consaul, USMC and his wife, Andrea; her grandchildren, Parker Consaul V, Reid Fitzgerald and Wren Fitzgerald; brother, Jon Pennino; and their beloved dog, Sophia.

FORT WORTH -- Gail Consaul began her next great adventure in the arms of our Lord on September 8, 2020 after a long battle with illness. Mrs. Consaul was 73 years old. SERVICES: Family and friends will gather from 5 to 7 p.m. Thursday, October... View Obituary & Service Information

The family of Mrs. GAIL ANN PENNINO CONSAUL created this Life Tributes page to make it easy to share your memories.

FORT WORTH -- Gail Consaul began her next great adventure in...

Send flowers to the CONSAUL family.