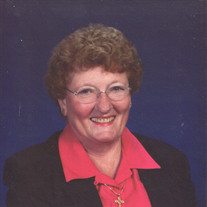 FORT WORTH -- Gail Wagoner Ackall died Thursday evening, August 2, 2018, surrounded by family. She was 80. SERVICE: A celebration of her life will be held at 11 a.m. Tuesday in the Sanctuary at University Christian Church, 2720 S. University Drive. A reception will held immediately following the service. MEMORIALS: In lieu of flowers, donations may be made to the Christian Church Foundation, 1099 N. Meridian St., Indianapolis, IN 46206-1986, for the Gail & Ed Ackall Permanent Fund to benefit University Christian Church and Transylvania University. Daughter of Fred and Lois Wagoner and older sister to three siblings, Gail was born in Chicago, Ill. on April 10, 1938. First in her family to graduate college, Gail attended Transylvania University, where she met her husband, Ed. They married June 14, 1958 and recently celebrated their 60th anniversary. Gail and Ed lived in Indiana, Michigan and then El Paso where Gail primarily worked at the University of Texas at El Paso (UTEP) as the director of the Medical Technology program for 20 years, while holding the position of Associate Dean for the College of Nursing and Health Sciences. Eventually, Gail and Ed retired and moved to Fort Worth to be near their children and grandchildren. Gail was the matriarch of her family and made spending time with family her biggest priority. She also was an avid world traveler, reader, and advocate for women's rights, as well as serving several Christian churches (Disciples of Christ) over the course of her life. SURVIVORS: Gail leaves behind her husband Ed; daughter and son-in-law, Diane and Bobby Hawley, daughter and son-in-law, Denise and Jay Rhodes, son and daughter-in-law, David and Danyelle Ackall; grandchildren, Alicia, Kelsey, Stewart, Noah, Liam and Malcolm; sister and brother-in-law, June and Ken Stover II, brother and sister-in-law, Fred and Shannon Wagoner, and sister and brother-in-law, Beth and Bruce Sheffer. Gail is also survived by an aunt, Madeleine Armstrong; as well as numerous beloved nieces and nephews and their families.

FORT WORTH -- Gail Wagoner Ackall died Thursday evening, August 2, 2018, surrounded by family. She was 80. SERVICE: A celebration of her life will be held at 11 a.m. Tuesday in the Sanctuary at University Christian Church, 2720 S. University... View Obituary & Service Information

The family of Dr. GAIL ARLINE WAGONER ACKALL created this Life Tributes page to make it easy to share your memories.

Send flowers to the ACKALL family.