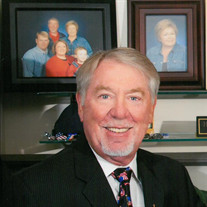 FORT WORTH -- Herbert Dale “Herb” Stephens Jr, a loving husband, father, granddad, brother, uncle, cousin, coach, and friend to many, passed away Thursday afternoon, April 18, 2019. Mr. Stephens was 72. Service: A Celebration of His Life will be held at 4:30 pm Thursday in the Sanctuary of University Christian Church, 2720 S. University Drive, Fort Worth, with a reception to follow in the church’s Walker Hall. Memorials: In lieu of flowers, consideration of contributions to the TCU Letterman's Association or BITS (Brain Injury Transition Services) through Texas Health Harris Foundation, in his memory, is suggested. Born April 2, 1947 in Huntington, WV, Herb was the son of Herb and Helen Waugh Stephens. He lived in Ceredo, WV until enlisting in the United States Air Force and serving his country for four years. After a year at San Angelo State, Herb was recruited to play basketball at Texas Christian University where he met the love of his life, Kathy Morris. Herb graduated from TCU with a B.S. in 1974 and earned his M.Ed. in 1979. As an educator, coach, mentor, and athletic director for 36 years, Herb touched many lives. He was preceded in death by his parents and his loving son-in-law, Jamie Wellman. Survivors: In addition to his wife, Kathy, Herb is survived by his daughter, Stephanie; grandson and best buddy, Payne; brother, John Stephens and his wife, Cindy; sister, Patty Stephens Bevins; and several nieces, nephews and cousins and their families; and many close friends.

The family of Mr. HERBERT DALE STEPHENS Jr. created this Life Tributes page to make it easy to share your memories.

Send flowers to the STEPHENS family.