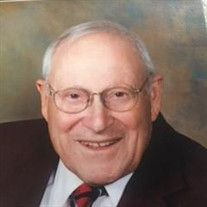 PLANO – Herman Isaac Morris passed away Saturday evening November 17, 2018. Mr. Morris was 91. SERVICE: 10:30 a.m. Tuesday in the Kornbleet Memorial Chapel, located in Ahavath Sholom Cemetery, 411 N. University Drive, Fort Worth, with Rabbi Brian Zimmerman of Beth-El Congregation officiating. Following committal prayers he will be laid to rest in the cemetery. Bearers of his casket will be Larry Brotman, Howard Herskowitz, Neil Hunt, Steve Katten, Steve Rapfogel and Larry Schoenbrun. MEMORIALS: For religious reasons, the family respectfully requests no flowers. However, in lieu of flowers, consideration of contributions to Community Homes for Adults, Inc. (CHAI), 11615 Forest Central Drive, No. 100, Dallas, TX 75243, Jewish Family Services, 4049 Kingsridge Road, Fort Worth, TX 76109, or to a charity of your choice, in his memory, is suggested. Born April 30, 1927 in Houston, Herman graduated from Lamar High School and finished three years at Rice Institute by the age of 18. He enlisted in the U.S. Merchant Marine Cadet Corp. After completing his service, he enrolled at the University of Texas at Austin where he received a BA degree in economics and English. After teaching in public school in Fort Stockton, Herman enrolled at UT Law School, graduating in 1950, with honors. He was an editor of the law review and a member of the Order of the Coif and Quizmasters. After graduating, he joined the faculty at Texas Christian University in Fort Worth to teach classes in business law, insurance and economic history. He opened a private law practice in Fort Worth, partnering first with Scranton Jones and later with Allen Hendelman. Following the death of his wife of 40 years, Judy Gerick from Hillsboro, in 1992, Herman married Shirley Schoenbrun Schneiderman of Dallas in 1994. He was a life-long Democrat. From age 13 until recent times, he wrote numerous letters to the editor which were published in the New York Times, the Wall Street Journal, and newspapers in Dallas, Fort Worth and New Mexico. He was a long-time member of the Fort Worth Jewish community and numerous organizations. His favorite expression was “It’s ok to live like a rich man, but always vote like a poor man.” SURVIVORS: In addition to his wife, Shirley, Herman is survived by his daughter, Ellen Morris St. Clair; his brother, Charles J. Morris; and numerous nephews, nieces and cousins and their families.

The family of Mr. HERMAN ISAAC MORRIS created this Life Tributes page to make it easy to share your memories.

Send flowers to the MORRIS family.