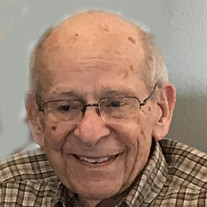 FORT WORTH -- Irvin Robinson, M.D. passed away peacefully on September 9th, 2019. Dr. Robinson was 93. SERVICE: 9:30 am Wednesday in the Kornbleet Memorial Chapel, located in Ahavath Sholom Cemetery, 411 N. University Drive, with Rabbi Andrew Bloom and Hazzan Jeffrey Weber officiating. Following committal prayers, he will be laid to rest in the cemetery. MEMORIALS: In lieu of flowers, consideration of contributions to a charity of choice, in his memory, is suggested. Born in Richmond, Virginia on November 22, 1925, the youngest of 7 brothers. HIs parents immigrated from Lithuania and settled in Richmond where they started a grocery business. On his 18th birthday, Irvin was drafted into the army and served in WWII under General Patton in the European campaign. He returned and attended University of Richmond for undergraduate studies and received his MD from the University of Virginia. Irvin married Libby Padow, the love of his life in 1950, and enjoyed 57 wonderful years together. They loved travelling the world, especially aboard cruise ships. Together, Irvin and Libby raised 4 children. They moved to Fort Worth in 1959, where he and his brother Charles Robinson were the first Gastroenterologists in Fort Worth and started their own practice. Irvin loved all celebrations, including birthdays, weddings and Bar Mitzvahs. He was always the life of the party. He was an avid tennis player and sports fan, and could often be found watching the Texas Rangers. He was extremely charitable and endowed programs at Tarrant County College, TCU, the JCC, Jewish Federation and the University of Virginia. Additionally, he was an active member of Congregation Ahavath Shalom and Beth-El Congregation. After retiring, he became a docent at the Kimball Art Museum. The family would like to thank the staff at the Vantage and his doctors for their care over the last few years. He was preceded in death by his parents; wife, Libby; his granddaughter, Andrea Robinson; and 5 siblings. SURVIVORS: In addition to his sons, Jeffrey and his wife, Sharon, Steve and Barry, he is survived by his daughter, Stacy and her husband, Darren; grandchildren, Justin and Michelle, Courtney, Haley and Brandon, Zane, Leah, Carly and Brandon; great-grandchildren, Rebel, Gage and Hadley; and brother, Morris in Williamsburg, Virginia; sister-in-law, Bess Robinson in Richmond, Virginia. In the last few years, he met a wonderful lady friend, Helen Martin, who has brought him so much joy and companionship.

The family of IRVIN ROBINSON M.D. created this Life Tributes page to make it easy to share your memories.

FORT WORTH -- Irvin Robinson, M.D. passed away peacefully on...

Send flowers to the ROBINSON family.