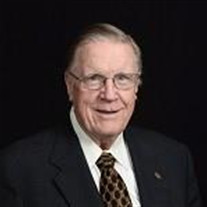 FORT WORTH -- Dr. J W Sellers, “Doodah” to his beloved grandchildren, passed away peacefully Monday morning, April 8, 2019. Dr. Sellers was 87. SERVICE: 2 pm Thursday in the sanctuary of First United Methodist Church, 800 W. Fifth Street, with Dr. Mike Marshall officiating. Dr. Sellers will lie in state from 1 to 2 pm Thursday at the church. Family and friends will gather in the church's Wesley Hall after the service. Following a service at the grave at 2 pm Friday, he will be laid to rest next to his wife, Gayla, in Trickham Cemetery, Coleman County. MEMORIALS: In lieu of flowers, consideration of contributions to Glen Lake Camp, the Trickham Cemetery Association or to a Methodist church of your choice, in his memory, is suggested. JW was born on November 26th, 1931 in Coryell County to the late Wert Allen and Ruby Blum Sellers. He graduated from Jonesboro High School and went on to receive his undergraduate degree from Texas Wesleyan University in Fort Worth, his master’s degree from the SMU Perkins Theological Seminary in Dallas and his Doctorate of Ministry from Drew University in Madison, New Jersey. JW married Gayla Jean McIver Hornell in 1971, along with her children Allen Bruce Hornell and Lori Lagenia Hornell Zachary from her marriage with Alex Bruce Hornell, who died in 1969, and together, grew their family with Jorge Wert “Jay” Sellers and Ruby Elizabeth Sellers. JW served the Methodist Church as a camp counselor at Glen Lake Camp and as a minister in the Central Texas Conference of the Methodist Church for 50 years until his retirement in 2002. He then served as a Pastor Emeritus at the Methodist Church in Rio Vista. He is preceded in death by his parents, wife, Gayla Jean McIver Sellers and his sisters, Mary Ann Sellers Burke and Carrahlee Sellers. SURVIVORS: In addition to his children, Lori and Michael, Allen and Lauren, Jay and Angelle and Ruby, J W is survived by his nine grandchildren and two great-grandchildren; brother, Joel Allen Sellers and his wife, Shirley; sister, Frieda Sellers Wolfe; and nieces and nephews and their families.

The family of Rev. Dr. J W SELLERS created this Life Tributes page to make it easy to share your memories.

Send flowers to the SELLERS family.