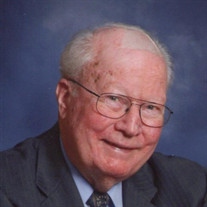 Fort Worth -- James Oscar Branch died Wednesday evening, January 27, 2021. He was 94. Born in Fort Worth, Jim was the son of Oscar James Branch and Carrie Beth Smith Branch. His military duty included World War II officer training school at Rice University and sea duty as Lt. Jr. Grade during the Korean War. After graduating from TCU in 1949, Jim joined his family’s printing business, Branch-Smith, where he was President and deeply involved in the business until his retirement. He devoted himself to Jesus Christ and was a member for more than 50 years at St. Andrew's Episcopal Church, including serving as Senior Warden. Jim wanted to be remembered most for recognizing the Lord’s many blessings in his life, often through the heritage of his remarkable grandparents and parents, and the ways his children continued to devote themselves to the same heritage and values. Jim served many years on the board of the Union Gospel Mission of Tarrant County, including chairman. He served twice as secretary of the Rotary Club of Downtown Fort Worth in his 50-plus years of membership and received Rotary’s Paul Harris Award, as well as the Advertising Club of Fort Worth’s Silver Star Award. Jim also served as chairman of Crimestoppers. He was a longtime member at Colonial Country Club where he enjoyed many rounds of golf with his friends. Married to his childhood friend, Mary Elizabeth Meeks, Jim was preceded by her death just one month prior to their 50th anniversary. In 2002, he married Nell Jernigin Reeder. In addition to his wife, Nell, Jim is survived by his children, Michael Branch and his wife, Sherry, David Branch and Beverly Branch; grandchildren, Terence Branch and his wife Becky, Paul Branch and his wife, Elizabeth, Kimberly Lee and her husband, Kevin, Rebecca Christopherson and her husband, Joel, Katy Branch and her husband, Michael Hennig, Macy Holloway and her husband, Matt, Lesley Kramer and her husband, Kevin; and great-grandchildren; and Nell's children, Jeff Reeder and Laura Person, Nancy Reeder Oerter and Steve, Ellen Reeder and Andy Simmons and Elizabeth Pitchford and William; and several grandchildren and great-grandchildren. A private committal service will be held at 1 p.m. Wednesday. In lieu of flowers, consideration of contributions to St. Andrew’s Anglican Church, 917 Lamar St, Fort Worth, TX 76102 or the Union Gospel Mission, 1331 E. Lancaster Ave, Fort Worth, TX 76102, in his memory, is suggested.

The family of Mr. JAMES OSCAR BRANCH created this Life Tributes page to make it easy to share your memories.

Send flowers to the BRANCH family.