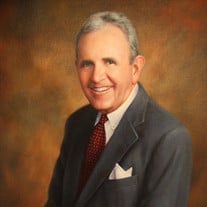 FORT WORTH – James Lee “Jim” Murray passed away Saturday morning, October 20, 2018. He was 85. MEMORIAL SERVICE: A celebration of Jim’s life will be held at 10 a.m. Friday at Christ Chapel Bible Church, 3701 Birchman Ave., with a reception to follow. MEMORIALS: In lieu of flowers, consideration of contributions to the Union Gospel Mission, 1331 East Lancaster Avenue, Fort Worth, TX 76102, in his memory, is suggested. Born December 19, 1932 in Fort Worth, Jim was the son of Scott and Grace Murray. While in high school, Jim started employment in the mail room of the Continental National Bank. Upon graduation from Texas Christian University and Rutgers University Stonier Graduate School of Banking, Jim continued working his way up the ladder for over 20 years at CNB alongside his lifelong friend, Ben Gunn. In the early 70's Jim and Ben decided there was a better way to serve people’s banking needs, so they filed a 100 page application to start Summit National Bank which opened January 6, 1975 at 1300 Summit Avenue. With a lot of support along the way from family, friends, loyal customers, shareholders, directors, faithful employees and good attorneys and CPA's, the bank prospered; many years later it was sold to Frost Bank. Jim defined success by what he was able to do to help others. He believed deeply in community involvement which resulted in him serving on and chairing many charitable organizations throughout the city. Jim always said, “My life was so blessed.” He was preceded in death by his parents and his beloved wife of 49 years, Suzie. SURVIVORS: In addition to his daughter, Dr. Kathleen Dodd and her husband, John, Jim is survived by their children, Joy and Grace, all of Brentwood, Tennessee.

The family of Mr. JAMES LEE "Jim" MURRAY created this Life Tributes page to make it easy to share your memories.

Send flowers to the MURRAY family.