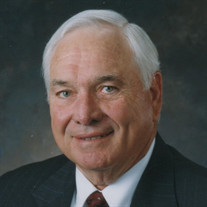 FORT WORTH – James Marion “Jim” Rich passed away peacefully Friday morning December 20, 2019. Mr. Rich was 88. SERVICE: 10 a.m. Saturday at Southcliff Baptist Church, 4100 SW Loop 820. Following interment in Greenwood Memorial Park, a celebration of his life will continue at Angelo’s Barbecue. Family and friends will gather from 5 to 7 p.m. Friday in the Great Room at Robertson Mueller Harper. MEMORIALS: In lieu of flowers, consideration of contributions to the General Fund or the Early Bird Sunday School Class, both at Southcliff Baptist Church, in his memory, is suggested. Born in Fort Worth on January 26, 1931, Jim was the son of William Clyde and Ina Inez Turner Rich. He graduated from R. L. Paschal High School, where he played basketball, before playing at North Texas State College, now the University of North Texas. Jim left college to join the U. S. Army during the Korean War and served two years. After coming back to Texas, Jim returned to college at Decatur Baptist College, now Dallas Baptist University, where he again played basketball and earned an Associate in Science degree. He then went back to North Texas and earned a Bachelor of Science degree in Physical Education and a Master’s degree in Education. While at Decatur Baptist, he met the love of his life, Anne Bradshaw; the couple married August 7, 1945 in Bowie. Jim and Anne had two children, Randy and Robyn, whom they loved dearly. Anne passed away in 2015 after 61 years of marriage. Jim began his teaching and coaching career in Corpus Christi where his football, basketball and golf teams won district and state championships. He moved his family to Fort Worth in 1965 and taught and coached at Castleberry High School. After a brief time away from education, Jim became Assistant Professor of Health and Physical Education at Tarrant County Junior College, now Tarrant County College. During this time, he also served as the head football coach at Trinity Valley School where his 1973 and 1974 teams were undefeated and won the TISC Conference Championships, both years. Jim retired after 16 years at TCJC. Since retiring, he and Anne devoted many years to small businesses, owning and operating Rich Homes, Inc., T.J.’s Hamburgers and Mail Services, Inc. During his spare time Jim loved playing golf and racquetball. He won both the Texas and Oklahoma state racquetball championships in the master’s division. He also authored the book, Fundamentals of Racquetball, and avidly played until age 82. He regularly played golf until earlier this year. Jim accepted Jesus Christ as his personal savior at age nine. He was a faithful member of the Southcliff Baptist Church and the Early Bird Sunday School class often saying, “The Bible class and Southcliff Baptist Church were the most rewarding times in his life”. He will be remembered as a loving husband, father, grandfather, great-grandfather, coach and mentor. The skills and discipline he instilled in his players and students are still a topic of conversation today. His love for his children, granddaughter and great-grandchildren will be in their hearts forever. Jim’s family wishes to express a special thank you to Community Hospice of Texas, their kindness and guidance over the last week of his life were a great source of comfort to his family. He was predeceased by his parents, wife and his sister, Clydene Carter. SURVIVORS: In addition to his children, Randy his wife, Sylvia, and, Robyn and her husband, Greg Martin, Jim is survived by his granddaughter, Shiloh Marston and her husband, David; great-grandchildren, Jace and Dylan Marston; and many nieces and nephews and their families. To send flowers or a memorial gift to the family of Mr. JAMES MARION "Jim" RICH please visit our Sympathy Store.
To order memorial trees or send flowers to the family in memory of Mr. JAMES MARION "Jim" RICH, please visit our flower store.
Send a Sympathy Card