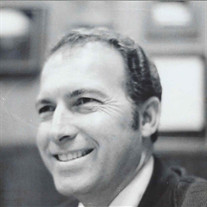 FORT WORTH -- James Guy Tetirick passed away peacefully Sunday afternoon, September 29, 2019. Mr. Tetirick was 88. MEMORIAL SERVICE: 1:30 p.m. Thursday in the Elizabeth Cramer Chapel at Arborlawn United Methodist Church, 5001 Briarhaven Road, following private military honors at Dallas-Fort Worth National Cemetery. MEMORIALS: In lieu of flowers, consideration of contributions to Arborlawn United Methodist Church, in his memory, is suggested. Born December 26, 1930 in Blackwell, Oklahoma, Guy was the son of Blake and Ione Mitchell Tetirick. He married Billie Louise Scott, his Ponca City High School sweetheart, on June 26, 1948, and soon after began his lifelong career with JCPenney. In his 43 years with JCP, interrupted by two years of service in the U.S. Army, Guy rose through JCP management ranks in 10 different stores in 4 states, Colorado, Nebraska, New Mexico and Texas. He first arrived in Texas in 1972 as manager of the recently opened Northeast Mall store in Hurst. In 1985, Guy was transferred to Washington D.C. where he served first as Assistant to the Director and then as Manager of State Government Relations. Guy’s office was moved to Austin, Texas in 1989, where he retired six years later. Hardworking, energetic, organized, efficient, thorough and outgoing, Guy sought perfection in every undertaking, at work and at home. He was a 32nd degree Mason, a former chapter president of the Rotary Club and president of the Hurst Chamber of Commerce in 1977-78. He was preceded in death by his parents, sisters, Ione and Suzie, and parents-in-law, L. A. and Alice Scott. SURVIVORS: In addition to his wife of 71 years, Billie, Guy is survived by his: children, Brad Tetirick and his wife, Peggy of Ashdown, Arkansas, Dean Tetirick and his wife, Mary Katherine of Fort Worth, and Cheri Gigliotti and her husband, Scott of Arlington; grandchildren and great-grandchildren, Joey and Jennifer Tetirick, and their daughters, Katherine and Eleanor, Amy and Aaron Bray, and their sons, Shepard and Statton, Jessica Tetirick, Samantha and Rett McSween, Stephen Tetirick, Jana Gigliotti and Sara Gigliotti; brother, John Tetirick and wife, Eula; and wife’s cousin, Joyce Scott.

The family of Mr. JAMES GUY TETIRICK created this Life Tributes page to make it easy to share your memories.

Send flowers to the TETIRICK family.