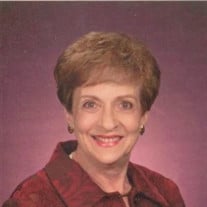 Fort Worth -- Jane Wiggin Gudgen York, a loving wife, mother and grandmother, passed away Sunday evening, February 21. A lifelong resident of Fort Worth, Jane was the daughter of Edwin Alan and Emily Hutchison Wiggin. She was a twin and at the time of her and Jean’s birth this was a rare occurrence; they were the talk of the hospital! Jane graduated from R.L. Paschal High School in 1960 and TCU in 1964 with a BBA degree. She was a proud member of Delta Delta Delta Sorority and TCU Student Council and later served as TCU’s Tri-Delta chapter advisor and president of the Fort Worth Tri-Delta Alumni Chapter where she made life-long friendships with “her girls” as she referred to them, and also held the office of Tri-Delta as National Pledge Advisor. Jane was a prolific volunteer and was very active in many organizations such as past president of Junior Canwick and Canwick Club, Roundelay and the Ryan Place Improvement Association. She was a member of the First Grandmother’s Club, Windsor Club, the Junior League, Thistle Hill Board, Paschal High School Century Celebration, Jewel Charity, Leadership Fort Worth, the Lecture Foundation and TCU’s Frog Club just to name a few. She served as publicity chairman of the Thistle Hill Anniversary Celebration. Jane served as vice president of the TCU National Alumni Board and was awarded the TCU Alumni Service Award in 2016. Of the many TCU activities, she served as chairman for two homecoming committees, co-chaired her 50th reunion, was a board member and lifelong member of the Clark Society and served as Stewardship Committee Chair for Clark Society weekend. One such homecoming her husband, Ken, served with her. Ken said it took an Aggie to assist the goal of money raised that year. If you wanted something organized and accomplished you would call Jane! She was a lifelong Frog fan in all athletic and campus events. She was a true Frog! A friend counted 187 frogs in her home and was still counting. In 1995 the Fort Worth ISD recognized her as a Distinguished Graduate of Paschal High School for her volunteer activities. Jane left an indelible imprint on her hometown, taught school and loved being Director of Membership for the Fort Worth Club for 12 years. During that time membership of the club flourished. She was in her element with her members; she was the go-to person for the members. Her ability to make people feel at ease was a true skill few people have. But her favorite job was stay at home mom attending tennis, soccer matches and any other activities her children participated. Jane met Ken Gudgen of Fort Worth, who was serving in the U. S. Army in Colorado while she was teaching school. They married in 1965 and returned home to Fort Worth where Ken was a very accomplished attorney. Their lives revolved around their children, Jenny Lynn and Kenneth Jr.. Life was spent around children’s sporting events. Jane loved riding the golf cart with Jenny at Colonial watching Kenneth and Ken play golf. They enjoyed many special years together until he lost his courageous battle with cancer. Later, Jane married Warren York a TCU graduate; they spent wonderful time with both sets of children and grandchildren. She and Warren had 21 wonderful years together. They traveled to TCU bowl games and bled purple! Jane loved life and lived it to the fullest. She never knew a stranger and would make a friend anywhere she went. When you met her somehow you knew she was genuinely interested in you. Always having a smile on her face and joy in her heart when you met her you knew you met a real friend. She was a true people person! Jane was preceded in death by her parents, her first husband, brothers, Alan and Ed Wiggin, and Warren’s son and grandson, Russell York and Zane Paduano. Our family wants to thank the wonderful care givers from Senior Helpers, Diane Chew and Olivia Jimenez and the staff of Vitas Hospice for their compassion. In addition to her loving husband, Warren York, Jane is survived by her children, Jenny Lynn Spradlin and her son, Reagen and his father, Tim, and Kenneth Gudgen and his wife, Daniele, and their son, Robert, and daughter, Elizabeth; Warren’s children, Lain York and his wife, Samantha, and their daughter, Sophia, Lynne York and her son, Zane, Taylor York and his wife, Carole, and their children, Leo and Ruby; and twin sister, Jean Roach and her husband John, and their daughters, Amy Bailey and her husband, Tull, and their children, John and James, and Lori Davis and her husband Craig, and their children, Emily and Dyllan. A service at the grave will be held at 2:00 p.m. on Tuesday, March 2, in Greenwood Memorial Park. We welcome all of Jane’s many friends are invited to attend. Those who choose to do so are asked to wear masks and observe social distancing. In lieu of flowers, consideration of contributions to University Christian Church. Delta, Delta Delta Sorority at TCU of the Clark Society, in her memory, is suggested.

Fort Worth -- Jane Wiggin Gudgen York, a loving wife, mother and grandmother, passed away Sunday evening, February 21. A lifelong resident of Fort Worth, Jane was the daughter of Edwin Alan and Emily Hutchison Wiggin. She was a twin and at the... View Obituary & Service Information

The family of Mrs. JANE WIGGIN GUDGEN YORK created this Life Tributes page to make it easy to share your memories.

Send flowers to the YORK family.