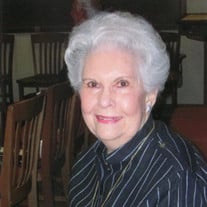 FORT WORTH – Jimmie Ruth Cheatham Griffith passed away peacefully Tuesday, December 1, 2020. Mrs. Griffith was 95. Jimmie Ruth was born November 16, 1925 in Florence, Alabama, the daughter of Raymond and Ethel Huffman Cheatham. After moving to Galveston, the family settled in Fort Worth where she remained the rest of her life. She attended McLean Junior High and was a Paschal Panther before graduating from Texas Christian University in 1947. She was proud to be a TCU 50 Year Alumnus and to cheer on the Horned Frogs. She was a member of the Bryson Club, TCU Women Exes and the Quinq Club. During World War II, she volunteered with the American Red Cross Motor Corps helping wounded service men to their appointments. Jimmie Ruth taught in the Fort Worth schools for 22 years. She was always an involved community member. After retiring from FWISD, she volunteered at W. I. Cook Children’s Hospital, receiving her Golden Heart pen for completing 2,500 hours. During the same time, as a member of First United Methodist Church, she chaired the program to “Re-Do” the Children’s Prayer Chapel with 25 needle point kneelers in the Noah’s Ark theme. She enjoyed Bible studies, volunteered in the “Lamb Program”, helped paint the Movable Labyrinth, needlepointed two kneelers, a prayer book marker and “The Holy Spirit” on a chair back in the Sanctuary. Jimmie Ruth shared her love of handwork with a group called the “Stitchers and played Bridge regularly with several groups. She met for lunch regularly with a group of ladies in her longtime neighborhood who called themselves, “The Hoods.” And, then there was the “Enchilada Club!” She was preceded in death by her parents and daughter, Laura Gail Griffith. In addition to her son, Gary Griffith and his wife, Pauline, Jimmie Ruth is survived by her grandson, Lee Lydick Griffith and many longtime friends. Following a private committal service Friday afternoon, she was laid to rest with her parents in Greenwood Memorial Park. In lieu of flowers, consideration of contributions to Cook Children’s Medical Center, in her memory, is suggested.

The family of Mrs. JIMMIE RUTH CHEATHAM GRIFFITH created this Life Tributes page to make it easy to share your memories.

Send flowers to the GRIFFITH family.