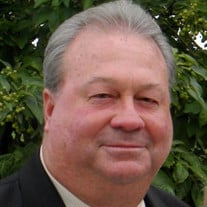 FORT WORTH – John Raymond Granger, a devoted husband, father and grandfather, passed away Sunday April 12, 2020. He was 68. SERVICE: A celebration of John’s life will be held at a later date. MEMORIALS: In lieu of flowers, consideration of contributions to First Tee of Fort Worth and College Golf Fellowship, Central Region, in John’s name, is suggested. Born in Fort Worth on Dec. 13, 1951, John was the son of Mary Frances Merrick and John Raymond Granger Jr. He graduated from Southwest High School before attending North Texas State University, now the University of North Texas. While at UNT, John was a 4-year All American golfer from 1971 to 1974. He is the only athlete to accomplish this achievement in the school’s history. In 1999, he was elected into the University of North Texas Athletic Hall of Fame. After a very brief stint as a professional golfer, John spent over 40 years in the mortgage banking industry. Golf remained a huge part of his life until the end. He was a longtime member of Colonial Country Club and when he wasn’t on the golf course, he most enjoyed being with his grandkids and watching them play sports. He was preceded in death by his parents and son. We have no doubt that John was greeted in Heaven by his son, Bart, and they are playing a long-awaited round of golf with a Slurpee in hand. SURVIVORS: In addition to his wife, Jan Tarvin Granger, John is survived by his daughter and her husband, Amy and Patrick James Maloney; his grandchildren, Sam, Jackson, Lila and Neal; Jan’s children and their children, Lance and Kathleen Carter and their son, Jack, Amanda Carter and her children, Kylie Steward and Carter Cole; sister, Susan Granger Dempsey and her husband, Terry Lambert; brother, Worth Granger; and several nieces, nephews and cousins and their families.

FORT WORTH &#8211; John Raymond Granger, a devoted husband, father and grandfather, passed away Sunday April 12, 2020. He was 68. SERVICE: A celebration of John&#8217;s life will be held at a later date. MEMORIALS: In lieu of flowers, consideration... View Obituary & Service Information

The family of Mr. JOHN RAYMOND GRANGER III created this Life Tributes page to make it easy to share your memories.

Send flowers to the GRANGER family.