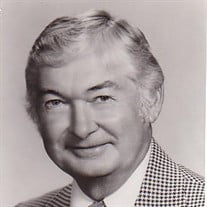 Lenard Lowell Plummer, 96, loving husband, father and grandfather died March 3, 2019. Born in Arkansas on July 6, 1922, he lived most of his life in Kansas City. He attended Arkansas State Teachers and graduated from the University of Missouri-Kansas City School of Law. He was associated with State Farm Insurance Companies most of his career and worked as a manager and then as an agency-owner in Shawnee, Kansas. Service to others was important to Lenard. He served on the Board of Directors at the YMCA, Lake Quivira Country Club and Shawnee Optimist Club. Many young State Farm agents sought his advice and would often drop by his office. Lenard was a kind, gentle man who was held in high-esteem by his children and extended family. He was always optimistic and kind to people. He referred to himself as being lucky to have been married to the two most wonderful women ever. Golf, politics, history and the Plummer Family were just a few of his interests. Lenard was preceded in death by his wife Ruth and daughter Elizabeth. Survivors include his wife, Emily Hardesty, daughters Connie Downing, Amber Scott and Sarah Plummer Erekson; grandchildren Kathy Grant, Dalton Grant, Aaron Scott, Susan Scott, Cameron Wilson and Mackenzie Wilson; great-grandchildren Lucy and Stella Wilson and Guthrie Barnes. The family will hold a private memorial service, but would like to invite friends to join them in a celebratory reception at 2:30 on March 14, 2019 at St. Paul’s United Methodist Church, 7740 Lackman Road, Lenexa, Kansas. In lieu of flowers, donations may be made to your local YMCA.

Lenard Lowell Plummer, 96, loving husband, father and grandfather died March 3, 2019. Born in Arkansas on July 6, 1922, he lived most of his life in Kansas City. He attended Arkansas State Teachers and graduated from the University of Missouri-Kansas... View Obituary & Service Information

The family of Mr. LENARD LOWELL PLUMMER created this Life Tributes page to make it easy to share your memories.

Send flowers to the PLUMMER family.