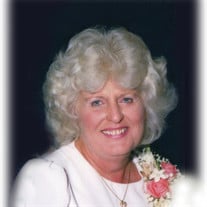 FORT WORTH -- Martha Ann Browning Fields, a loving mother and grandmother, passed away peacefully Saturday morning, April 13, 2019. Mrs. Fields was 82. SERVICE: A Celebration of Martha’s Life will be held at 11 a.m. Thursday in the Chapel of Robertson Mueller Harper. Following the service, she will be laid to rest next to her husband, Paul, in Laurel Land Memorial Park. Family and friends will gather from 10 to 11 a.m. Thursday at the funeral home. Born in Fort Worth on April 28, 1936, Martha was the daughter of Olin Stuart and Johnnie Emaline Engler Browning. Her early years were spent in the Arlington Heights area of Fort Worth before her family moved to Everman. When Martha was seven, her brother Eddie was born; she adored him. At age 12, she met her best friend, Zonita, a family relationship they shared for the next 70 years. That same year, Martha met the love of her life, Paul Fields. After graduating from Everman High School in 1954, she and Paul married. In 1962, they welcomed their only child, Mark Gregory, into the world. Martha was a devoted mother and homemaker. She and Paul were married for 62 years before his death in 2016. Martha was a fantastic cook and gracious hostess. The Holidays were very important to Martha and Paul. They welcomed family and friends into their home, which Martha loved to decorate. She loved to read, shop and watch her favorite television shows, and make an occasional run up to WinStar for some fun! Some of her fondest memories were of fishing with Paul and her brother, Ed, and his wife, Nancy. Martha will be greatly missed by her family and friends. She was preceded in death by her parents, brother, Ed, and Zonita, who died earlier this year. SURVIVORS: In addition to her son, Mark Gregory, Martha is survived by her daughter-in-law, Kelli; grandchildren, Aidyn and Ian; sister-in-law, Nancy Browning and her daughters, Tracey Norris and Amy Browning and their families; and special family friends, Vanesa, Christy and Courtney.

FORT WORTH -- Martha Ann Browning Fields, a loving mother and grandmother, passed away peacefully Saturday morning, April 13, 2019. Mrs. Fields was 82. SERVICE: A Celebration of Martha&#8217;s Life will be held at 11 a.m. Thursday in the... View Obituary & Service Information

The family of Mrs. MARTHA ANN BROWNING FIELDS created this Life Tributes page to make it easy to share your memories.

FORT WORTH -- Martha Ann Browning Fields, a loving mother and...

Send flowers to the FIELDS family.