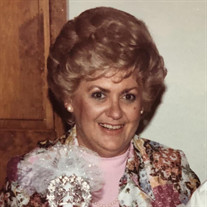 FORT WORTH – Nancy Post Cotharn passed away peacefully in her home on Monday afternoon, May 18, 2020. Mrs. Cotharn was 84. She passed from natural causes related to dementia. SERVICE: The family appreciates all the love and support of our friends, and hope you understand the challenges of honoring Mom during the Covid-19 pandemic. She will be interred next to Dad at the D/FW National Cemetery; no graveside service is allowed. Current plans for a memorial service are to be held on Saturday, June 20, at 10:00a at St Stephen Presbyterian (2700 McPherson Avenue, Fort Worth). Any updates will be provided at a later date. MEMORIALS: In lieu of flowers, consideration of contributions to “Cook Children’s Hospital in memory of Nancy Cotharn” , is suggested; the dollars are intended for Jeremy’s Gym to support neurological rehabilitative care. LIFE: Nancy was born November 26, 1935, at Cook Children’s Hospital in Fort Worth. She was the daughter of Aylmer Bluford and Ruth Copeland Post. The youngest of four children, she grew up in Ruston, LA on a small farm, where she developed her love of horses. Her father supported the family with an automotive business, the Post Motor Company. At Ruston High School, she played basketball and kept the scorebook for the baseball team. Nancy attended Baylor University in Waco, TX, and graduated from the Baylor School of Nursing in 1957. She began her professional nursing career in Waco, assisting in surgical procedures with an Ophthalmologist. On June 15,1957, Nancy married Vachel Cotharn at First Presbyterian Church in Ruston, LA. In their early years of marriage living in Waco, they traveled to Central Texas dancehalls for Bob Wills performances, and they enjoyed horseback riding and weekend trail rides. In 1960, Nancy left her nursing career to become a full time Mom, raising three sons. The family moved to Fort Worth in 1966, and in 1971 moved to a home down the street from her best friend and college roommate Joann Post. Nancy was an extraordinary baseball Mom, never missing a game, and keeping the scorebook at every game. She spent many hours as a volunteer at University Little League, helping to manage the concession stand and serving as Player Agent. She and Vachel traveled extensively, with memorable trips to Hawaii, San Francisco, and Super Bowl XIII in Miami. They were members of St. Stephen Presbyterian Church and Colonial Country Club. She was surrounded by extended family in the D/FW area, and nothing brought her more joy than hosting them for meals and holidays, in a home filled with laughter and 42 games. She was a tremendous cook, well known for her biscuits and gravy, chocolate sheet cake, and lemon pie. She returned to her nursing career in 1982, eventually finding her way to the Director of Nursing position at Wedgwood Nursing Home, where she worked for nearly 20 years until 2006; she was a two time Beverly Enterprises National Employee of the Year. She was committed to her work there and loved the staff as if they were family. Nancy was a passionate fan of the Texas Rangers, the Dallas Cowboys, and against all odds the Dallas Stars. She was a prolific needle pointer and left a trail of Kleenex box covers and drink coasters across the United States. Nancy was married to Vachel for 60 years, until he passed away in 2017. SURVIVORS: Nancy was mother of Greg, Bruce (late wife, Lisa), and Bradley Cotharn (wife, Kris); grandmother to Courtney Cotharn-Lambert (husband, Garrett), Jake Pippen (wife, Catharine), Baron Cotharn (wife, Sam), and Austin and Kacy Cotharn; great-grandmother to Louie and Codie Lambert, James Pippen, and Baron Jr and Charlotte Cotharn. She was the beloved Aunt Nancy.

FORT WORTH &#8211; Nancy Post Cotharn passed away peacefully in her home on Monday afternoon, May 18, 2020. Mrs. Cotharn was 84. She passed from natural causes related to dementia. SERVICE: The family appreciates all the love and support... View Obituary & Service Information

The family of Mrs. NANCY BETH POST COTHARN created this Life Tributes page to make it easy to share your memories.

FORT WORTH – Nancy Post Cotharn passed away peacefully in her...

Send flowers to the COTHARN family.