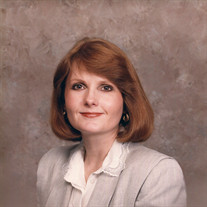 FORT WORTH -- Nancy Lyn Spurlock passed away peacefully Sunday afternoon, September 2, 2018, following a long illness. She was 69. MEMORIAL SERVICE: A celebration of her life will be held at 1 p.m. Saturday at Trinity Lutheran Church with a reception following in the church’s Fellowship Hall. MEMORIALS: In lieu of flowers, her family suggests memorial gifts be made to Trinity Lutheran Church Children’s Center, 3621 Tulsa Way, Fort Worth, Texas 76107. Nancy graduated from Kansas State University in 1970 with a degree in education and began her teaching career. She taught in Van, Texas and Lake Worth, Texas then was hired by the Department of Defense to teach children of military personnel. Her first assignment was in Pusan, South Korea where she stayed for 3 years before being transferred to Guantanamo Bay Cuba. Military personnel were not allowed to go off base into Communist Cuba so she and her fellow teachers learned to fish, snorkel and scuba dive. After her time in Cuba she was transferred to Germany where she taught in Mannheim, Hanau, and Ansbach. Enjoying the same off time as state side teachers, she traveled all over Europe and even went to East Berlin before the Berlin Wall was demolished. Her next assignment was at Lakenheath American High School in England where she was promoted to principal. She had many interesting stories about her time as principal, mostly involving some type of creative student behavior. During her years in Europe she continued her education, receiving Masters degrees in business administration and finance. She retired from teaching in 1995 and returned to Fort Worth. Following in her father’s footsteps, she became a stock broker then later worked for Thrivent Financial for Lutherans. She worked with several elderly care organizations, and was an active member of Trinity Lutheran Church. She was preceded in death by her parents, Floyd and Eleanor Spurlock. SURVIVORS: Nancy is survived by her sister, Melinda Davis and her husband, Jeff; brother, Ned Spurlock and his wife, Sue Ann; nephew, Matthew Spurlock and his wife, Jennifer, and their daughters, Madison and Samantha; niece, Rebecca Spurlock; and many cousins. She also leaves behind many friends made over the years who will miss her greatly.

FORT WORTH -- Nancy Lyn Spurlock passed away peacefully Sunday afternoon, September 2, 2018, following a long illness. She was 69. MEMORIAL SERVICE: A celebration of her life will be held at 1 p.m. Saturday at Trinity Lutheran Church with a... View Obituary & Service Information

The family of Ms. NANCY LYN SPURLOCK created this Life Tributes page to make it easy to share your memories.

Send flowers to the SPURLOCK family.