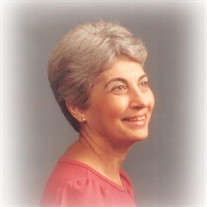 FORT WORTH -- Pauline Landman Wittenberg passed away Saturday morning, March 14, 2020. Mrs. Wittenberg was 96. SERVICE: 11 am Thursday at Beth-El Congregation, 4900 Briarhaven Road. Following committal prayers, she will be laid to rest next to her husband in the Beth-El Section of Greenwood Memorial Park. For those of you who wish to attend by streaming video, you may do so by going to bethelfw.org, click on “streaming worship services” and “Pauline Wittenberg Service.” MEMORIALS: In lieu of flowers, the family suggests that memorials, if desired, be donated to Beth El Congregation, the Ft. Worth Opera Association, or the Alzheimer’s Association. Pauline Landman Wittenberg was a lifelong resident of Ft. Worth. She was a homemaker, and was very active in civic affairs. But, most importantly, she was in the vanguard of women taking a more active role in American society. She was quoted in the book The Women of ‘85: "The key to success is to learn to get along with people. Be a good listener, and always open to new and interesting opinions and suggestions. Since this generation of women have the opportunity to do anything...with its problems and rewards, the challenge will be to learn how to find balance in life that will truly give contentment." Pauline was born March 25, 1923 in Fort Worth and was the surviving spouse of Edwin S. Wittenberg of Lincoln, Nebraska. She attended Lily B. Clayton, McLean Jr. High School, and Paschal High School. Pauline attended The University of Illinois, TCU and graduated from the University of Texas, Austin campus with a B.A. in Elementary Education. Pauline was the daughter of the late Gus and Daisy Landman and sister to the late Jack M. Landman. She married Edwin S. Wittenberg in 1945when he returned from combat in WWII. She was a full time mother and wife, dividing her energies between family and community service. She was formally a substitute teacher, part time secretary for Ed, and dedicated volunteer for many civic organizations. Pauline and Ed were lifelong patrons of the arts and members of Beth El Congregation. When her children were young, she was active in P.T.A., Camp Fire Girls, and taught Sunday School at Beth El Congregation. Pauline was involved in the leadership of the National Council of Jewish Women’s annual Book Fair for many years and was President of the Fort Worth Opera Guild as well as a member of the board of the Ft. Worth Opera. Pauline was dedicated to and was very active in leading Ft. Worth women in making Ft. Worth a more worthwhile place to live. She served as President of Women of Rotary, the Ft. Worth Section of the National Council of Jewish Women, the Jr. Women’s Club, the Sixty Two Club of the Women’s Club, the Mockingbird Garden Club, and the Ft. Worth Chapter of the American Field Service. Pauline also served as a Director of the Women’s Club, Vice President of Beth El Congregation and served on the boards of the League of Women Voters, Senior Citizens Center, and held office in the Federated Woman’s Club, The Ft. Worth Community Theater and United Way. She was a member of Beth El Congregation Sisterhood, The Lecture Foundation, and Colonial Country Club. Pauline and Ed were lifelong travelers, having traveled together to most countries throughout the world. The Wittenberg family would like to thank the caring staff at James L. West Center and Vitas Hospice and the private care givers whose devotion and efforts meant a great deal to the entire family. SURVIVORS: In addition to her children, Gail A. Wittenberg of Santa Fe and Fort Worth and Alan L. Wittenberg of Dallas, Pauline is survived by many nieces and nephew and cousins.

The family of Mrs. PAULINE LANDMAN WITTENBERG created this Life Tributes page to make it easy to share your memories.

Send flowers to the WITTENBERG family.