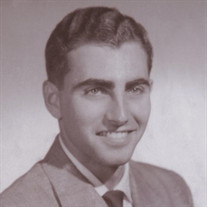 Fort Worth, Texas – Beloved long-time Fort Worth physician and professor of clinical medicine, Phillip Paul Saperstein, D.O., passed away at Trinity Terrace Friday evening, Dec. 17, during his 95th year. Following committal prayers, he was laid to rest privately in the Beth-El Section of Greenwood Memorial Park. A public celebration of his life will be held at a future date. Born and raised in Trenton, New Jersey, Paul served in the U. S. Navy during World War II, attaining the rank of Lieutenant JG. Following the war, he received his bachelor’s degree from Yale University and subsequently graduated from the Kansas City College of Osteopathic Medicine. After serving his general practice residency in Kansas City, he moved to Fort Worth where he established his successful medical practice in 1956. Paul’s medical career in Fort Worth spanned more than 60 years, during which time he participated in the revolution in modern medicine, faithfully serving thousands of patients. As a general practitioner of the old school, which included making house calls, his practice ran the gamut from delivery of babies to end-of-life care, serving as the family doctor for several generations of many of his patients. In addition, he was a long-time FAA-certified medical examiner. For many of the years that he was active in private medical practice, Paul also taught medical students and supervised medical residents at the Texas College of Osteopathic Medicine in Fort Worth, winning multiple awards for his teaching and mentorship. In 2010, Paul retired from his full-time practice and embarked on an eight-year second career as a professor of clinical medicine at the University of North Texas Health Science Center in Fort Worth. At UNTHSC, he was not only a teacher, but a role model and mentor to hundreds of first- and second-year medical students. To honor Paul’s distinguished service, UNTHSC named a conference room in his name. At the end of 2018, he retired for the second and last time. Blessed with an abundance of energy over the years, Paul enjoyed physical fitness, travel, fine dining, sailing, scuba diving and flying his own airplane. Even as his health began to decline, he always kept a positive outlook and remained as active as possible. Paul’s family wishes to thank the many wonderful and dedicated doctors, nurses and other care-givers on the skilled nursing floor at Trinity Terrace, who were so good to him in the last few years of his life. He was preceded in death by his parents, Albert and Vera Solomon Saperstein, his daughter, Leigh Tomlinson, and his sister, Ruth Saperstein Levy. In addition to his sons, Stephen Alton and his wife, Judy, and George Saperstein, Paul is survived by nephews, Marc Levy and his wife, Elissa, and Alan Levy and several great and great-great nephews. Memorials: In lieu of flowers, consideration of contributions to a charity of your choice, in his memory, is suggested. Paul’s family entrusted his care and services to “E. C. “Trey” Harper III and Robertson Mueller Harper Funerals, Cremations and Life Celebrations.

The family of Dr. PHILLIP PAUL SAPERSTEIN D.O. created this Life Tributes page to make it easy to share your memories.

Fort Worth, Texas – Beloved long-time Fort Worth physician and...

Send flowers to the SAPERSTEIN family.