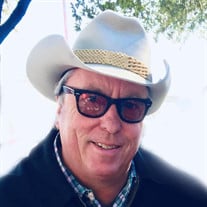 FORT WORTH -- R. David Newton passed away in the early morning hours Thanksgiving Day surrounded by his loving wife Kristi and their tight-knit family. He was 66. Born in Kingsville on February 17, 1954, David was the son of JoRene and R.K. Newton. He was a star tennis player for the Fighting Brahmas of King High School. A tireless lad with a commendable work ethic, he entered the job market as a ticket taker at Cine I & II. He quickly rose to assistant manager in part because of the loyal customer base he established, particularly among his high school buddies. He balanced his entrepreneurial activities by serving as an acolyte at the Epiphany Episcopal Church each Sunday. It was during these heady days that he was awarded the coveted status as the first president of the Artripe Society, a position he never relinquished. David’s college career at the University of Texas at Austin was exemplary. It was made even more memorable when he met the love of his life, Kristi Howard. They married in 1977 and had two wonderful children, Whitney and Banks. Needless to say, there were a lot of broken hearts when Kristi took David off the market. From the Fort Worth Rodeo to 21 Club, the couple was a match made in heaven. David fought his cancer with courage in the truest sense. He withstood its relentless toll with grace under pressure. When the fight became worse than the cancer, he decided to live what time he had left with dignity. He was not afraid to die. But he was terribly upset that he would not have the time to do all he wanted with his family, especially his beloved grandchildren, J3 Wynne and Wally Newton. A consummate outdoorsman, he especially loved hunting and fishing in South Texas, South America, Alpine, Colorado City, Hubbard, the Tally Ho Hunting and Fishing Club, and Creede, Colorado. David never lost his sense of humor, and it was through this gift that he was able to make friends so easily. His morning coffee club at the Starbucks on Camp Bowie was the source of great humor and repartee. One looked forward to a call from David with the latest banter or antic. It is those friends that can best recount the story of this loss. While losing a family member or dear friend at any time is never easy, one would think losing them Thanksgiving Day would be more difficult. But if Thanksgiving Day is that day one reflects and gives thanks for all we receive, then how better to celebrate the life of a friend on a day you will never forget. Embrace your friends while you can and celebrate their memory when they are gone. The family is comforted by knowing that David is no longer in pain. He is now at rest in the arms of our Lord. In addition to his beloved bride, Kristi, David is survived by daughter, Whitney Wynne and her husband, John and his son, Banks Newton and daughter-in-law, Ashley; grandsons, John Robert “J3” Wynne III and Robert Wallace “Wally” Newton; his dear mother, JoRene Newton; his sister and brother-in-law, Nancy and Glenn Dishong; his brothers, Tio and Joel Newton; and his brother-in-law and wife, Ward and Lynne Howard. Honorary Bearers and Coffee Club members include his lifelong friend from age two, Jamey Clement, as well as Doug Cook, Paul Dorman, David Dunham, Scott Faciane, George Ferguson, Charlie Flanders, Arnie Gachman, Bill Howell, Jack Koslow, Joe Lancarte, Mearl McBee, Greg McCabe, Rick Merrill, Eric O’Keefe, John Peloubet, John Pinto, Warren Prescott, Harold Siegel, Rick Suman, Paul Tripplehorn, Robert Vaughn, and Harvey Yoder. A private service is scheduled. In lieu of flowers, consideration of contributions to the Texas Parks and Wildlife Foundation at 2914 Swiss Ave, Dallas, TX 75204, in David’s memory, is suggested.

FORT WORTH -- R. David Newton passed away in the early morning hours Thanksgiving Day surrounded by his loving wife Kristi and their tight-knit family. He was 66. Born in Kingsville on February 17, 1954, David was the son of JoRene and R.K.... View Obituary & Service Information

The family of Mr. R. DAVID NEWTON created this Life Tributes page to make it easy to share your memories.

FORT WORTH -- R. David Newton passed away in the early morning...

Send flowers to the NEWTON family.