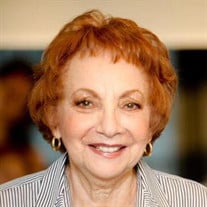 FORT WORTH -- Rhona Adrienne Silverstein Raffel passed away peacefully Thursday morning, May 30, 2019. Mrs. Raffel was 85. SERVICE: A funeral service will be held at 1 p.m. Friday in the Kornbleet Memorial Chapel, located in Ahavath Sholom Cemetery, 411 N. University Drive, with Rabbi Andrew Bloom officiating. Interment will follow in the cemetery. MEMORIALS: In lieu of flowers, consideration of contributions to Congregation Ahavath Sholom, the Michael J. Fox Foundation, or a charity of your choice, in her memory, is suggested. Born November 24, 1933 in the Brooklyn Borough of New York City, Rhona was the daughter of Samuel and Tillie Feinstein Silverstein. She grew up in Baltimore, MD and later lived in Florida where she met her husband of 63 years, Irwin Raffel. The family moved to Fort Worth in 1974. Rhona was well known in the community as a successful, friendly realtor who always welcomed newcomers to town. She never met a stranger, and no matter who you were, she was instantly your friend. Her family brought her no greater pride and joy; she will be in their hearts forever. Rhona's family would also like to thank all her caregivers who helped her, as well as the family. SURVIVORS: In addition to her husband, Irv, Rhona is survived by her son, Scott and his wife, Kathy of Fort Worth; daughter, Susan Furman and her husband, Maurice of San Antonio; grandchildren, Jennifer and Martin Weiss, Sarah and Benjamin Bartlett, Emily and Daniel Koch, Dena Furman and Aaron Furman; great-grandchildren, Sydney and William Bartlett; sister Gloria Sepp and her husband, George; and many nieces and nephews and their families.

The family of Mrs. RHONA ADRIENNE SILVERSTEIN RAFFEL created this Life Tributes page to make it easy to share your memories.

Send flowers to the RAFFEL family.