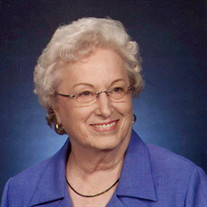 Fort Worth - It is with much love and deep sorrow that we mourn the passing of Rosemary Johnson Runnion. Mrs. Runnion was 92. SERVICE: A celebration of her life will be held at 11 am Friday, August 27, in the Sanctuary at University Christian Church, 2720 S. University Drive. Her family will host a reception at the church immediately following the service. She will be laid to rest privately next to her husband, George, on the family lot in Greenwood Memorial Park. MEMORIALS: In lieu of flowers, consideration of contributions to a a charity of choice, in her memory, is suggested. Rosemary was born in Fort Worth, the oldest daughter of John Daniel and Lucy Kelso Johnson. She had the good fortune to be raised by extraordinary parents who, by their example, instilled in her a strong and enduring faith and an ever-present positive outlook. These lessons made possible her ability to relish life’s joys with gratitude and endure life’s sorrows with grace. Rosemary attended Alice Carlson Elementary, McLean Junior High and graduated from Paschal High School in 1945. Rosemary also attended The University of Texas at Austin where she was a member of the Tri-Delt sorority, majored in Home Economics and graduated in 1950. She met her husband of over 68 years, George, on a blind date in August 1948 and married in March 1951. Rosemary was a full-time homemaker and raised two children. She also completed post-graduate studies at TCU in Education and at Scottish Right Hospital in Dallas and was a Certified Language Therapist. Rosemary worked for over a year to establish the Tri-Delt sorority on the TCU campus. Later, she became a part-time private Tutor who helped so many children overcome learning disabilities, and a Teacher in The Key School summer programs. Rosemary was a member of the Junior League of Fort Worth, the Canwick Club, and the Jewel Charity Ball; she was an Elder of University Christian Church, and was a Board Member of both the All-Church Home for Children and Lecture Foundation; and she was Chairwoman of Meals on Wheels of Tarrant County. One of her favorite affiliations was her lunch and bridge club which was active for over 60-years with the same group of ladies. Rosemary is remembered for her friendly, sweet and kind nature. She had many beloved and loyal friends and loved her hometown, Fort Worth. She was always smiling and beautifully dressed and was a loyal TCU fan and supporter despite being a Longhorn alumnus. She loved her large extended family and never disparaged anyone she knew or was related to. She rarely missed a monthly family sewing club gathering and loved strawberry shortcake and pimento cheese. And she always joked that her favorite flavor was “butter.” Throughout her life, Rosemary was sustained by the knowledge that faith, hope, and love abide, and that the greatest of these is the power of unconditional love. She loved her children and her grandchildren, her extended family, her friends, and her church. Special thanks to the memory care team at Trinity Terrace, the hospice care team from Brookdale Hospice and private caretaker Karen Odom, who made life safe, comfortable and dignified for Rosemary. Rosemary was preceded in death by her parents; husband, Vernie George Runnion, Jr., who passed away in 2019; and her daughter, Kelly Runnion Feik, who passed away earlier this year. Survivors: In addition to her son, John Steward Runnion and son-in-law, Britt Carlin Feik, both of Fort Worth, Rosemary is survived by her grandchildren, Meagan Elizabeth Feik and Britt Colin Feik and his wife Katherine; her sister, Maydee Johnson Scurlock of Dallas; three nieces, numerous cousins and other cherished family members.

Fort Worth - It is with much love and deep sorrow that we mourn the passing of Rosemary Johnson Runnion. Mrs. Runnion was 92. SERVICE: A celebration of her life will be held at 11 am Friday, August 27, in the Sanctuary at University Christian... View Obituary & Service Information

The family of Mrs. ROSEMARY JOHNSON RUNNION created this Life Tributes page to make it easy to share your memories.

Fort Worth - It is with much love and deep sorrow that we mourn...

Send flowers to the RUNNION family.