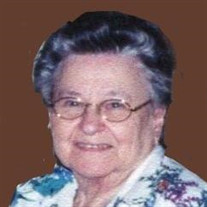 FORT WORTH -- Roxie Viola Cannamore Hemminger passed away peacefully Monday evening, November 19, 2018. Mrs. Hemminger was 97. SERVICE: 1 p.m. Monday in the chapel at Robertson Mueller Harper, Hospice Chaplain Stephen Schwartz officiating, with a reception to follow at the home of Ralph and Melody Bradley. Family and friends will gather from 3 to 5 p.m. Sunday at the funeral home. MEMORIALS: In lieu of flowers, consideration of contributions to Brookdale Hospice or to a charity of choice, in Roxie’s memory, is suggested. Born July 27, 1921 in Malone, Texas, Roxie grew up, along with her brother and sister, on a share cropping cotton farm in rural Hill County and attended several one-room schools. During World War II, Roxie moved to the city and worked making tents for the army. She later worked at the “Bomber Factory,” now Lockheed-Martin, where, because of her small size, she fit inside the bomber wings and riveted bolts put through from the outside. Roxie retired from cafeteria service with the Fort Worth schools. After the war, she met and married Bud Hemminger, a marriage that lasted 62 years before Bud’s death in 2008. They lived on the south side of Fort Worth where they raised three kids, Clyde, Sherry and Roy. Roxie will be laid to rest privately in Burleson Memorial Park where she will once again lay beside Bud. SURVIVORS: In addition to her children, Clyde and his wife, Ann-Marie, Sherry and her husband, Robert Brown, and Roy and his wife, Barbara, Roxie is survived by nine grandchildren, 12 great-grandchildren and one great-great grandson.

The family of Mrs. ROXIE VIOLA CANNAMORE HEMMINGER created this Life Tributes page to make it easy to share your memories.

Send flowers to the HEMMINGER family.