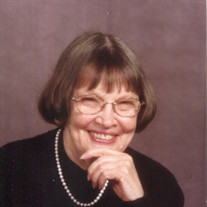 Fort Worth, Texas -- Sammy Williams Crews passed away peacefully Thursday morning, July 8. She had recently celebrated her 95th birthday. Born in Springtown, Sam my was the middle daughter of Ira A. and Billie Mae Sturdivant Williams. During her childhood, she was surround ed by a large extended family of grandparents, aunts and uncles, cousins, her brother, Ken, and her sister Jo. Her family moved to Fort Worth when she was a child. Sammy married the love of her life, Harold Crews; a marriage of 49 wonderful years before his death in 1994. She was a pediatric nurse at the Children’s Clinic, working with Dr. Edward Weir for 36 years. Active in the Republican Party, Sammy served as a Precinct Chairman for over 20 years and was a delegate to the Re- publican State Convention for several years. An avid supporter of TCU, she was a member of the Frog Club, TCU Women’s Exes and the Quing Club. She was a devout and active member of St. Christopher’s Episcopal Church for over 60 years. She enjoyed traveling the world with trips to Italy, Israel, Egypt, New Zealand and numerous trips to Ireland where she adopted the Blun nie and McMeniman Clans. She was preceded in death by her parents; husband; son, Ted Crews; her brother, Ken; sister, Jo Winkler; cousin, Gay Weightman; brother in-law, James Crews; and sister-in-law, Maxine Crews. In addition to her son, Hal and his wife, Emily, Sammy is survived by her grandson, Kyle; sister-in-law, Dean Williams Ball; and many loving nieces and nephews and their families. Following committal prayers on Thursday, Sammy was laid to rest next to Har- old in Greenwood Memorial Park.

Fort Worth, Texas -- Sammy Williams Crews passed away peacefully Thursday morning, July 8. She had recently celebrated her 95th birthday. Born in Springtown, Sam my was the middle daughter of Ira A. and Billie Mae Sturdivant Williams. During... View Obituary & Service Information

The family of Mrs. SAMMY WILLIAMS CREWS created this Life Tributes page to make it easy to share your memories.

Send flowers to the CREWS family.