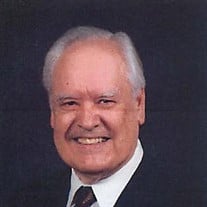 FORT WORTH -- Ted A. Tomlinson passed away peacefully at home early Thursday morning, September 5, 2019, surrounded by his family. Mr. Tomlinson was 96. SERVICE: A celebration of Ted’s life will be held at 2 p.m. Tuesday in the chapel at Robertson Mueller Harper. MEMORIALS: In lieu of flowers, consideration of contributions to Seed Effect, online at seedeffect.org/, or to P.O. Box 141223, Dallas, TX 75214, in his memory, is suggested. Born in Fort Worth on July 7, 1923, Ted was the son of Homer and Monette Whaley Tomlinson. He graduated from Duncanville High School and Texas Christian University. Ted enlisted in the Reserve Corps and was later called to active duty in the U. S. Army Air Corps. He served in World War II as a sergeant in the intelligence unit of the 84th Fighter Wing for two years and was awarded the Bronze Star for meritorious service in connection with military operations in the European Theater. His unit also received the Belgian Fourragere for meritorious service that led to the liberation of Belgium. After returning from the war, he married the love of his life, Frances Kathleen Nelson. Ted and Frances just celebrated their seventy-third anniversary on August 20. Ted worked alongside his father, brother, Homer Tomlinson Jr. and son, Ted A. “Tommy” Tomlinson Jr. in the family business, The Fort Worth Shopper. He retired after the business was sold in 1975 and spent much of his time traveling, pursuing interests in art and science, spending time with his family, and documenting his memoirs and military service. Ted was an accomplished artist and even illustrated several books. He also loved teaching and encouraging his grandchildren to draw and pursue creative interests. Later, Ted and his wife compiled and published The Tomlinson Lone Star Book of Texas Records. His family would like to thank Beyond Faith Hospice, Westside Caregivers, and Almost Home for their care and support given. He was preceded in death by his parents, brother and son. SURVIVORS: In addition to his wife, Frances, Ted is survived by his daughter, Kathy Tomlinson Womack and her husband, Clyde; his grandchildren, Hilary Tomlinson Shellhorse and her husband, Brent, Missy Womack Williams and her husband, David, Whitney Womack, Bill Womack and Chris Womack and his wife, Jina; great grandchildren, Holden and Hutton Shellhorse and Sophia and Ellie Williams; and his twin sister, Betty Tomlinson Douglas; and nieces and nephews and their families.

FORT WORTH -- Ted A. Tomlinson passed away peacefully at home early Thursday morning, September 5, 2019, surrounded by his family. Mr. Tomlinson was 96. SERVICE: A celebration of Ted&#8217;s life will be held at 2 p.m. Tuesday in the chapel... View Obituary & Service Information

The family of Mr. TED A. TOMLINSON created this Life Tributes page to make it easy to share your memories.

FORT WORTH -- Ted A. Tomlinson passed away peacefully at home...

Send flowers to the TOMLINSON family.