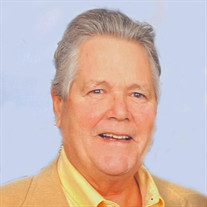 FORT WORTH – Timothy James Sweeney passed away peacefully at home Monday morning. Tim was 75. Born in Rochester, New York on January 18, 1945, Tim was the son of Raymond G. and Mary E. Herron Sweeney. He married Cynthia Childs Ambrose on February 4, 1990. A realtor since 1963, Tim was an avid golfer and completer of crossword puzzles. He was a man that brought a smile to every person he met. Every nurse and person he knew, he called by their name. Tim was larger than life and loved his children and Cynthia’s children with all of his heart. When grandchildren came along, they loved him and always wanted to be around him. His friends, especially our dearest friends, Jerry and Susan Namy, Tim considered family. He was preceded in death by parents, daughter, Colleen Sweeney Carter and stepson, Troy David Ambrose. In addition to his wife of 30 years, Cynthia, Tim is survived by his children, Timothy J. Sweeney Jr. and his wife, Carol of Rochester, NY, and Alana Sweeney and Erin Sweeney, both of Bedford; stepdaughter, Amy Russell and her husband, Warren of Fort Worth; grandchildren, Sean and Adam Carter of Las Vegas, NV, Caleb, Caroline and Collin Russell of Fort Worth, and McKenzie Ambrose of Azle; brother, Terry Sweeney and his wife, Judy; sister, Susan Canavan and her husband, John; and several nieces, nephews, cousins and their families. MEMORIALS: In lieu of flowers, consideration of contributions to Tim’s favorite charity, St. Jude Children’s Research Hospital, in his memory, is suggested.

The family of Mr. TIMOTHY JAMES SWEENEY created this Life Tributes page to make it easy to share your memories.

FORT WORTH – Timothy James Sweeney passed away peacefully at...

Send flowers to the SWEENEY family.