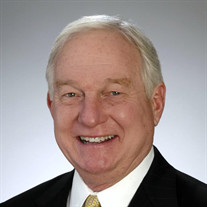 FORT WORTH – Truitt Clinard passed from this life Saturday morning, August 8, 2020 after a short and courageous fight against undiagnosed lung disease. Mr. Clinard was 74. Born in Fort Worth on March 31, 1946, Truitt was the son of Gordon and Christine Browder Clinard. He graduated from R. L. Paschal High School and attended Texas Christian University where he was a proud member of Sigma Alpha Epsilon fraternity. After graduating from TCU in 1968, he joined the U. S. Marine Corps and he and his wife moved to Quantico, Virginia, going through Officer’s Candidate School and becoming a First Lieutenant. Following his military tour, the family moved to Houston where they lived before relocating back to Fort Worth where he has resided since. Truitt’s first job was in real estate, initially working for several large brokers in Dallas and Houston. With several of his former TCU friends, he went into business for himself and has worked in all aspects of commercial real estate and real estate investments. In 1996, Truitt married Rinda Reeder, beginning a life full of travel and adventure. The two traveled the world together – visiting 44 different countries. He kept in touch with the many friends they made along the way. Together they took the family on many wonderful trips to the Florida and Texas beaches, Disney World, twice, on a Caribbean cruise and to Washington, D.C. Many special memories were made during those trips. Truitt was involved in the real estate development of a community cancer center on Magnolia Avenue, The Center for Cancer and Blood Disorders in 2003. Since then, he has served as Executive Director for the charitable foundation, the Cancer Assistance Fund of North Texas (CERFT). Truitt took great satisfaction in providing cancer patients and their families with services such as counseling, financial assistance, screening and wellness programs. Never meeting a stranger, he attracted people with his charm and quick wit. Truitt loved talking about high school and college football, airplanes and flying and all the fun times he had with his dear golf buddies. Truitt was such a big presence and will be dearly missed. Survivors: In addition to his beloved wife, Rinda, Truitt is survived by his daughters and their husbands, Erin and Tim Willis and Lindsay and Mike Maresh; stepchildren, Tiffany and Brent Vaughan and Derek and Sarah Reeder; grandchildren, Grey Willis, Sydney Vaughan, Ryan Maresh, Allyn Willis, Jordan Vaughan, Mollie Maresh and Evie Reeder; his sister, Tracye Schlange; and many very dear friends. SERVICE: Due to the ongoing risks of Covid-19, a grand memorial, fitting of Truitt, is planned for a later date. MEMORIALS: Consideration of contributions to the Cancer Assistance Fund of North Texas (CERFT), 901 W. Rosedale Street, Ste.120, Fort Worth, Texas 76104, honoring Truitt’s memory, is suggested.

FORT WORTH &#8211; Truitt Clinard passed from this life Saturday morning, August 8, 2020 after a short and courageous fight against undiagnosed lung disease. Mr. Clinard was 74. Born in Fort Worth on March 31, 1946, Truitt was the son of Gordon... View Obituary & Service Information

The family of Mr. TRUITT CLINARD created this Life Tributes page to make it easy to share your memories.

FORT WORTH – Truitt Clinard passed from this life Saturday morning,...

Send flowers to the CLINARD family.