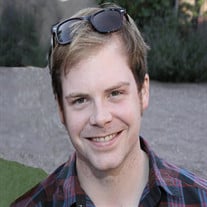 William Charles Reynolds, beloved son, brother, and friend, was laid to rest in a private graveside service at Greenwood Memorial Park on June 12, 2021. Those who wish to make a donation honoring his memory may do so to St. Andrew’s Episcopal Church (st-andrew.com), the Fort Worth Police Department Family Association, the Fort Worth Symphony Orchestra, or a charity of one’s choice. At 10:17 am on July 31, 1985, Will was born in Fort Worth, Texas, the first of twins, to Karen Dewees and Thomas Byrne Reynolds. Along with older brother Thomas, Jr., and twin sister Grace, he was raised in the always loving, often chaotic, Reynolds family home on Fort Worth’s near southside. Growing up, Will was sweet and asked for little, preferring to see that the needs of others came first. However, he was not without a stubborn streak; he was known to bring adults around him to tears of laughter, interrupting their long-winded explications with lines like, “Just tell me the story!” or voicing the thoughts of passengers waiting to deboard an airplane: “Get me out of here!” That same little boy loved to study the hermit crabs he found in the tide pools that dot the rocky beaches of Carmel, California; with his sister, he collected backyard insects for their matching bug jars, explaining “The doodlebugs are my friends!” Will quietly and humbly pursued his interests. He studied history and warfare from an early age, recreating intricate battle sequences with his toy army men. He took up drums at the age of ten and, coerced into playing publicly, rocked the lower school talent show. He and sister Grace were “go-to” acolytes at St. Andrew’s Episcopal Church, always dependable. As a Boy Scout, he achieved the rank of Eagle, and enjoyed two challenging summer trims to Philmont, hiking and camping with his father and fellow Scouts. He forged lifelong friendships on the football field and is fondly remembered by his teammates and coaches at Fort Worth Country Day School, where he also worked as a summer coach during a university break. Will graduated from the University of Colorado at Boulder, double-majoring in history and archaeology; in addition to his studies, he was able to indulge his interests in nature, music, and philosophy. His shyness often meant he was not the first to seek new friends, but when they found him, they found him for life. His quick wit and dry, self-deprecating humor won many admirers, while his diverse intellectual curiosity led to thoughtful, deep, often impassioned, discussions. He crackled with charismatic fervor when discussing history, politics, and music especially. Will’s love of music deepened during his college years, when he worked in security at Boulder’s Fox Theater and met many incredible performers; with infectious enthusiasm, he eagerly shared his growing insights about contemporary trends with appreciative family and friends. His knowledge of the origins, development, production, and qualities of various cymbals was encyclopedic. From the beginning, a natural polyrhythmic sense led Will to drumming, and he never stopped challenging himself to perfect his skill. He studied privately and took a summer course at Berklee College of Music in Boston, all while using recordings, books, and videos to train his ear as well as his hands; he performed with bands in Boulder, Denver, and Fort Worth. He was sidelined in 2015, when a congenital heart defect was discovered, necessitating open-heart surgery, a difficult recovery, and some loss of physical strength. Will and his father took special pride in the gigs they performed together, encompassing pop, funk, and jazz. He truly seemed to be at his expressive best behind the kit, and those who were privileged to hear him play know the pleasure it was to share Will’s passion. The family wishes to thank Dr. Robert Kelly, Rev. Brent Christian, Dr. Patrick O’Malley, Wes Robinett, the Bucket List Band, and the loving family and friends of all ages who have provided countless kindnesses, support, and memories.

William Charles Reynolds, beloved son, brother, and friend, was laid to rest in a private graveside service at Greenwood Memorial Park on June 12, 2021. Those who wish to make a donation honoring his memory may do so to St. Andrew&#8217;s Episcopal... View Obituary & Service Information

The family of Mr. WILLIAM CHARLES "Will" REYNOLDS created this Life Tributes page to make it easy to share your memories.

Send flowers to the REYNOLDS family.