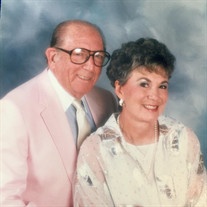 FORT WORTH -- Barbara Lee Stenzler Goldstein passed away peacefully Sunday evening, Jan. 1, 2017. Mrs. Goldstein was 87. Service: 11 a.m. Wednesday at Beth-El Congregation, 4900 Briarhaven Road. Following committal prayers, she will be laid to rest next to her husband, Dore, in the Beth-El Section of Greenwood Memorial Park. Memorials: In lieu of flowers, consideration of contributions to the Jewish Federation of Fort Worth and Tarrant County, the Tarrant Literacy Coalition, or the Humane Society of North Texas, in her memory, is suggested. Barbara was an internationally renowned watercolorist and art teacher whose paintings reflected the global scope of her talents. Ever the entertainer, her home, whether in Fort Worth or her beloved San Miguel de Allende, was always open to her students, friends, collectors, and family. She was born in New Orleans and lived most of her childhood in San Antonio. Barbara attended the University of Texas in Austin where she studied art and design. She met and married the true love of her life, Dore Goldstein, in 1949. Soon thereafter came her three children, GeGe, Tere, and Danny aka "Red." Her art studio was always at her home in Tanglewood until Dore passed away in 1992. She then moved her studio to her new home in San Miguel de Allende, Guanajuato, Mexico, in 1993 where she created some of her most memorable art. She came back to the U.S. in 2005 and passed away in Arlington after a long battle with Alzheimer's disease. She was preceded in death by her parents, Max and Ethel Yentis Stenzler; husband, Dore; and brothers, David and Mitch Stenzler. Survivors: In addition to her children and their spouses, GeGe and Rick Muenchuasen of Spring, Tere Goldstein and John Lanier of Arlington and Red and Julie Goldstein of Fort Worth, Barbara is survived by four grandchildren and three great-grandchildren. To send flowers or a memorial gift to the family of Mrs. BARBARA LEE STENZLER GOLDSTEIN please visit our Sympathy Store.
To order memorial trees or send flowers to the family in memory of Mrs. BARBARA LEE STENZLER GOLDSTEIN, please visit our flower store.