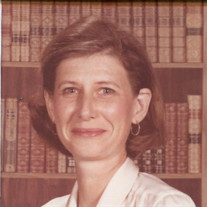 FORT WORTH – Barbara Towne McGinnis Jr. passed away peacefully Saturday evening, August 24, 2019, from complications to frontotemporal dementia. Ms. McGinnis was 77. SERVICE: A celebration of Barbara’s life will be held at 1 p.m. Saturday, September 7, in the chapel at Robertson Mueller Harper. Her family will receive friends prior to the service at the funeral home. Following cremation, her ashes will be placed next to her parents at Mt. Olive United Methodist Church in Randallstown, Maryland. MEMORIALS: In lieu of flowers, consideration of contributions to Thistle Hill, 1509 Pennsylvania Avenue, Fort Worth, TX 76104, or to the Harris School of Nursing, 2800 W. Bowie Street, Fort Worth, TX 76109, in her memory, is suggested. Born March 27, 1942 in Baltimore, Maryland, Barbara was the daughter of David Franklin and Barbara Towne McGinnis and grew up with her two brothers, David and Richard. After graduating from Bel Air High School in 1960, she received a Bachelor’s degree in nursing from Texas Christian University in 1965. Returning to Fort Worth in the 1970’s, Barbara held several nursing positions before retiring as a school nurse at Wedgwood Sixth Grade School. She was preceded in death by her parents and brother, Richard. SURVIVORS: In addition to her brother and his wife, David and Hannah, Barbara is survived by Richard’s wife, Miranda; three nieces and three nephews; and two great-nieces and six great-nephews. To send flowers or a memorial gift to the family of Ms. BARBARA TOWNE McGINNIS Jr. please visit our Sympathy Store.
To order memorial trees or send flowers to the family in memory of Ms. BARBARA TOWNE McGINNIS Jr., please visit our flower store.
Send a Sympathy Card