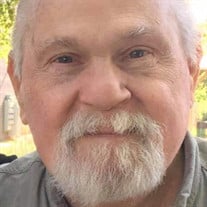 Fort Worth -- Barry Conrad Haynes entered into the presence of our Heavenly Father on Monday morning, March 29. He was 80. Born in Bell, California, Barry was the son of Giles and Neitha Nixon Haynes. He served honorably in the U.S. Naval Reserves before his time at General Dynamics. Barry found his niche when he joined the U.S. Postal Service from which he retired after 30+ years. He had a mind for numbers which perfectly suited his work with the U.S.P.S. Barry lived a life full of wonderful people. He was blessed by his faith, his family, and friends. Those who had the opportunity to know him have described Barry as generous, sweet, funny, loyal, determined, and so friendly, he will be missed. He was preceded in death by his parents. In addition to his wife, Lysta Watkins Haynes, Barry is survived by his daughters, Heather Allred and her husband, Aaron, and Gretchen Hale and her husband, Corey; his son, Joshua Haynes; grandchildren, Alex, Austin, Hannah, Jordan, Taylor, Benjamin, and Bethany; sister, Brenda Sholeen and her husband, Jack Spikes; and numerous in-laws, cousins, nieces, nephews, and other extended family. Family and friends will gather from 5 to 7 p.m. Thursday in the Great Room at Robertson Mueller Harper. A funeral service will be held at 1 p.m. Friday in the Chapel at the funeral home with interment to follow in Emerald Hills Memorial Park, Kennedale. To send flowers or a memorial gift to the family of Mr. BARRY CONRAD HAYNES please visit our Sympathy Store.
To order memorial trees or send flowers to the family in memory of Mr. BARRY CONRAD HAYNES, please visit our flower store.
Send a Sympathy Card