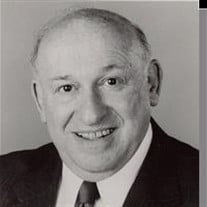 FORT WORTH -- Bernard Sidney Appel, retired president of RadioShack, passed away peacefully Sunday afternoon, April 2, 2017. Mr. Appel was 85. Service: 1 p.m. Tuesday in the Barnett Sanctuary at Congregation Ahavath Sholom, 4050 S. Hulen Street, with Rabbi Andrew Bloom and Cantor Shoshana Abrams Kaikov, officiating. Following committal prayers, he will be laid to rest in Ahavath Sholom Cemetery. Memorials: The family respectfully requests that no flowers be sent. However, in lieu of flower, consideration of contributions to Congregation Ahavath Sholom or to a charity of choice, in his memory, is suggested. Bernie Sidney Appel, a master merchandiser, a consumer-electronics pioneer and the streetwise president of Radio Shack as it mushroomed into a $2.3 billion chain with more than 7,000 stores, has passed away after a tenacious, years-long battle with congestive heart failure. Dubbed “Mister Radio Shack” and well known for his pugnacious style and wide smile, the 85-year-old business executive, visionary and philanthropist had a global reputation for being tough but fair and never cancelling an order. A bona-fide retail genius, he was in charge of day-to-day operations at Radio Shack in 1977 when it introduced the world’s first desktop computer, the TRS-80. He was on the successful team that took Ma Bell to the Supreme Court with a lawsuit that opened the door for retail stores to sell telephones. During his 34 years at Radio Shack, Mr. Appel held every key position, culminating with his tenure at the top from 1984 to 1992, the heyday of the Fort Worth-based chain. “I had the greatest job in the world,” Mr. Appel often said, reflecting on the family atmosphere fostered at work, his mentors within the Tandy Corporation, his 75 business trips to Asia and his myriad stopovers in Israel, where he advised start-up companies and engaged in philanthropic endeavors. Mr. Appel’s twin passions were Radio Shack and Israel. He received the Israel Bonds Star of David Award in 2007; New York City’s Defender of Jerusalem Award in 1990; the Anti-Defamation League of B’nai B’rith Electronics & Appliances Division Torch of Liberty Award in 1988. He served on the Advisory Board of the Jewish Studies Program at the University of North Texas; worked for the creation of the Jewish Education Agency of Fort Worth; was president of the Jewish Federation of Fort Worth & Tarrant County; and served on the United Jewish Appeal Regional Financial Relations/Jewish Agency Committee; Project Renewal Cluster, Acco-East, Israel; the campaign cabinets of the UJA Southern, Southwestern, and Western Region Campaign Cabinets; the advisory board of the Business Network for Israel and was a member of Fort Worth’s Beth-El Congregation. In the civic and social sphere, he served on the board of Tarrant County’s Crime Prevention Resource Center and as president of Safe City Commission Crime Stoppers. He was a longtime member of the Masons, Tabernacle Lodge; Shrine, Moslah Lodge; Rotary Club of Fort Worth; Century II Club and Colonial Country Club. He served on the boards of Casa Manana and the Arts Council of Fort Worth & Tarrant County. In 1988, at a time when he was living alone and divorced, a friend at Ahavath Sholom fixed him up on a blind date with a cousin in Atlanta. Later that year, he married Ellen Carey, a fine arts photographer. The couple were regulars at the symphony, the ballet, the opera, and the Cliburn. Survivors: wife Ellen Carey Appel; son, Jerry and Sheril Appel; daughters Arlene and Michael Kleinberg of New York and grandchildren, Alyssa, Joshua, Arielle Kleinberg, Max and Sophie Appel and Rachel Liebert. To send flowers or a memorial gift to the family of Mr. BERNARD SIDNEY APPEL please visit our Sympathy Store.
To order memorial trees or send flowers to the family in memory of Mr. BERNARD SIDNEY APPEL, please visit our flower store.