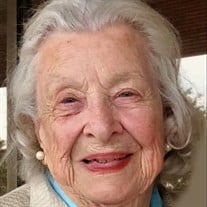 FORT WORTH — Betty Claire Schmid Dupree McKnight died peacefully at her home on August 12, 2020. She was 95 years old. The second of three children born to Walter Arnsdale “Mickey” and Claire Foster Schmid, Betty graduated from Arlington Heights High School at age 15. She then went on to attend Wellesley College for one year, then The University of Texas where she pledged Kappa Kappa Gamma. There she graduated in the top 1% of her class, Phi Beta Kappa, and won the UT Intramural Golf Championship. Betty Claire started her career in journalism working for the Fort Worth Star Telegram. She moved to New York for seven years to report for “Life Magazine” and “Mademoiselle Magazine. She also served as a reporter in Europe, where she used her press pass to accompany a load of coal in a Skymaster C-54 in the Berlin Airlift. She also interviewed the Duke and Duchess of Windsor and reported it in a series called “Life Goes to A Party.” Another article she wrote celebrated the 100th anniversary of the Erie Railroad. She was a devoted member of St. Andrews Episcopal Church, where she was married twice and attended every Sunday. Betty Claire was also a strong leader in Fort Worth. She served as president of The Jewel Charity, and was an active member of The Assembly and Fort Worth Garden Club. She was also the longest dues-paying member of River Crest Country Club. In the early 1960s, she and Priscilla Holland set forth a plan to create Fort Worth Country Day School. Betty Claire phoned and invited all the founding board members, and called the first three meetings. All the founding board members formed lasting friendships. She and Priscilla insisted that the new school hold daily Anglican chapel services, which did take place during the school’s first two years. An early and energetic volunteer for the Van Cliburn Piano Competition, Betty Claire employed her diplomatic gifts. She housed international contestants in her home, and held private dinners for supporting musicians including Aaron Copeland. She and her son, Rob later traveled to Moscow to visit Vladimir Viardo, a Van Cliburn winner, and to deliver contraband obtained from Martha Hyder. Mr. Viardo ultimately became a proud American citizen and a Texan. Following the death of her adored first husband, Robert P. Dupree, Betty Claire headed the annual fundraising event that benefits Cook Children’s Hospital, The Jewel Charity Ball. She broke all fundraising records up to that point. She remained a widow for seventeen years, but later found love again and married Alfred McKnight Jr., a decorated World War II fighter pilot who had been shot down in the Battle of the Bulge and survived a prisoner of war camp in Germany. Together they enjoyed hosting their blended family of children and grandchildren at Alfred’s Midnite Angus Ranch in Walnut Springs. It was a second very happy season of her life. Betty Claire was unsurpassed as a grandmother to her three grandchildren, Claire, Shap and Robert. In their infancies she would take the “midnight shift” for feedings. In their early youth she was the instigator of indulgent adventures discouraged by their parents, like trips to watch the Dallas Cowboys at sports bars, and outings to the Dixie Classic Fair to ride roller coasters and eat cotton candy. She faithfully attended birthday parties, sporting events and graduations. As they got older, Betty Claire liked nothing better than beating her grandchildren in cards. Betty Claire even attended college classes with Claire at Patrick Henry College when visiting her. She had much in common with Professor David Aikman, who had reported for Time Magazine on the opening of China; so, she attended his three-hour seminars twice. Betty Claire was preceded in death by her parents, two siblings, Suzanne Shirley Schmid and W.A. “Mickey” Schmid Jr., a daughter, Katherine Claire Dupree, and beloved great-nephews, Kelly Tripplehorn and Mick Schmid. She is survived by her daughter, Ellen Davis (Ron), grandchildren, Claire Brueggman, Shapley Davis and Robert Davis, son, Rob Dupree (Jenny Pace) and step-granddaughter, Tabitha Wolfe. Betty Claire is also survived by her stepdaughter, Ann McKnight Stevens, stepson, David McKnight, sister-in-law, Geraldine Harmon Schmid, nephews, Mickey and Billy Schmid, niece, Charlotte Tripplehorn, and their families. She is also survived by two first cousins, Jody Foster of Dallas and George Peyton of Piedmont, California. SERVICE: A service at the grave will be held at 11 a.m. Tuesday, August 25, in Greenwood Memorial Park. The Davis family plans to hold a memorial service outside early in October, when they are able to travel, and will post a subsequent announcement. MEMORIALS: In memory of Betty Claire, the Davis family is creating a scholarship at Patrick Henry College in the Department of Journalism to further the study of objectivity in political reporting. Contributions may be sent to: Patrick Henry College, 10 Patrick Henry Circle, Purceville VA 20183. Also, St. Andrews Episcopal Church, 917 Lamar St, Fort Worth, TX 76102. We rejoice in the knowledge that Betty Claire is in the company of the Heavenly Host and of Our Lord and Savior, Jesus Christ. “Better is one day in your courts than a thousand elsewhere.” Psalm 84:10 To send flowers or a memorial gift to the family of Mrs. BETTY CLAIRE SCHMID DUPREE McKNIGHT please visit our Sympathy Store.
To order memorial trees or send flowers to the family in memory of Mrs. BETTY CLAIRE SCHMID DUPREE McKNIGHT, please visit our flower store.