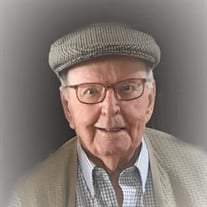 FORT WORTH -- It is with great sadness that we announce the passing of our father, Bill Neff Blackmon Sr. His death occurred Friday, Sept. 16, 2016, in Springfield, Mo. Service: Following a committal service at 11 a.m. Saturday, he will be laid to rest with his wife in Greenwood Memorial Park. Memorials: In lieu of flowers, consideration of contributions to the Texas Scottish Rite Hospital, in his memory, is suggested. A doting grandfather and even more so as a great-grandfather, Bill said his greatest pleasure came from his family, Fort Worth and the Frogs. A lifetime resident of Fort Worth and supporter of Texas Christian University, it was said that he "bled purple." Bill was very proud of the fact that, with the exception of during World War II, he had missed only two TCU football games. As part of that "Greatest Generation," Bill served with distinction in the U.S. Army during World War II. He took part in the Normandy Invasion and the Battle of Bastogne, earning five major battle ribbons and a Purple Heart. When Bill returned home, he met the love of his life, Dell Prather, on a blind date. They were married for 64 years before her death in 2008. Bill was state sales manager for Schenley Distilleries where he set national sales records that made him the first person ever to earn the "Man of the Year" award - twice! He was elected to three terms as a city councilman for Richland Hills and was a life-long member of the Masonic Lodge earning his 32nd degree. His memberships also included Moslah Temple Shrine, the Patrol and the Royal Order of Jesters, Court #32. Survivors: In addition to his children, Kim and her husband, Freddy Henry, of Little Rock Ark. and Neff and his wife, Manhua, of Fort Worth, Bill was fortunate to have seven grandchildren, Rachel, Andria, Chris, Sarah, Kiley, Karah and Alyssa; and two great-grandsons, Jonah and Simon. To send flowers or a memorial gift to the family of Mr. BILL NEFF BLACKMON Sr. please visit our Sympathy Store.
To order memorial trees or send flowers to the family in memory of Mr. BILL NEFF BLACKMON Sr., please visit our flower store.