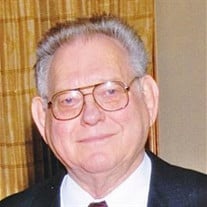 FORT WORTH -- Byron Hubert Anderson passed away peacefully on Saturday, Nov. 4, 2017. He was 84. MEMORIAL SERVICE: A celebration of Byron’s life will be held at 11 a.m. Moncday in the Chapel at Robertson Mueller Harper. Family and friends will gather at the home of Stuart and Rebecca Isgur immediately following the service. MEMORIALS: In lieu of flowers, consideration of contributions to The Salvation Army, in his memory, is suggested. Born in Brownwood on Nov. 17, 1932, Byron grew up in Brownwood and San Antonio where he attended Harlandale High School. His father sold farm equipment, including windmills, so he became familiar with mechanical systems at an early age. Byron earned his Bachelor of Science in Mechanical Engineering from Texas A&M University in 1954. In 1956, he earned his Master of Science in Mechanical Engineering, again from Texas A&M and fulfilled his ambition to see the world beyond Texas by joining the U. S. Navy and served aboard the repair ship USS Jason. After his enlistment concluded in 1957, he began work at Convair in Fort Worth on the B-58 Hustler program. In the early 1960s, Byron was part of the General Dynamics team working on the landing gear of what would become the F-111 Aardvark. In the mid-1970s, Byron was part of a small team working to design and build the YF-16, later known as the F-16 Fighting Falcon. Over the years he traveled across the country and internationally for work. He also provided valuable advice to the F-35 Lightning II landing gear team. After his 50-year career with Lockheed Martin, Byron received the Aero Star Award in 2008 for his efforts in pioneering the development of landing gear systems. The Byron H. Anderson ’54 Fellowship was generously established by him for Texas A&M’s Department of Mechanical Engineering. “I created the scholarship as a way to repay the fellowship awarded to me by Humble Oil & Refining Company while I pursued my master’s degree,” he said. “I want to help others experience the benefits of attending Texas A&M which provided the basis for my fulfilling lifetime of work and personal achievements.” Byron married Pat Matthis in March of 1967. His family and many friends remember him fondly as a kind, generous, and humble man. Byron’s philanthropy was a blessing to Tarrant County and to his alma mater, Texas A&M. He was a true “dog person” and had a special place in his heart for his dear Boston Terriers. Byron and his wife Pat were a part of the Berkeley Place community for 50 years where they made lifelong friends who recall sharing numerous holidays and sweet memories of good old Texas porch sitting. His family extends their appreciation and thanks to his many neighbors, present and former, with whom he formed enduring friendships and who extended many kindnesses to him – especially after the loss of his son and wife. He was preceded in death by his parents, beloved wife, Pat, and son, John. Survivors: In addition to his brother Alan, Byron is survived by his sister-in-law, Donna Pecchi; nephews, Packard Anderson, Jim Farrell, Bruce Farrell and Martin Farrell; nieces, Teresa Wilking, Joyce Alexander and Elizabeth Copes; and a loving extended family. To send flowers or a memorial gift to the family of Mr. BYRON HUBERT ANDERSON please visit our Sympathy Store.
To order memorial trees or send flowers to the family in memory of Mr. BYRON HUBERT ANDERSON, please visit our flower store.