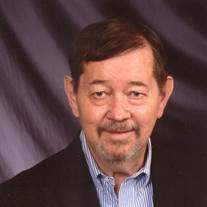 FORT WORTH -- Byron Max Courtney died Sunday morning, June 4, 2017, after an extended illness. He was 72. Service: A celebration of Max's life will be held 2 p.m. Thursday at St. Stephen Presbyterian Church. Honorary bearers will be officers of the Mansfield Police Department. In lieu of flowers, consideration of contributions to the St. Stephen Presbyterian Church Choir, 2701 McPherson Ave., Fort Worth, TX 76109, the Southern Poverty Law Center, Post Office Box 2390, Montgomery, Ala. 36177-8331, or a charity of choice, in his memory, is suggested. A lifelong Texan, Max was born Aug. 15, 1944 in Kermit, the son of Marion and Lena Donaghey Courtney. The family moved shortly thereafter to Odessa, where Max spent his childhood. He attended Permian High School, where he played football for the Permian Panthers, graduating in 1962. Max went to college at West Texas State University and earned a BS and MS in chemistry. He was a member of Alpha Tau Omega and remained active with the fraternity all his life. He moved to Fort Worth in 1969, where he worked on his PhD at TCU, but he found his life's calling when he took a position in the Fort Worth PD Crime Lab. Max served there for ten years and spent several more as an adjunct professor of Criminal Justice before opening a private lab, Forensic Consultant Services, where he solved homicides, did chemical analyses, operated breath test programs, and much more for many of the cities in and around the Metroplex, as well as for the District Attorney's office and as a defense consultant. After closing his lab, he taught at Baylor University for several years, then worked for Mansfield PD until his retirement. Max's expertise was highly valued, and he was renowned for the scientific integrity and honesty of his work. He was a respected, award-winning member of the Southwestern Association of Forensic Scientists, as well as the American Academy of Forensic Sciences, the Southern Association of Forensic Scientists, and the American Society of Crime Laboratory Directors, and he was a founding member of the international Clandestine Laboratory Investigating Chemists organization. A highly active and committed member of his church, St. Stephen Presbyterian, Max sang with the choir and served as a both a Deacon and the chair of numerous committees. Through the church, he loved to volunteer with Habitat for Humanity and Samaritan House, and he did humanitarian mission work in Mexico numerous times and in Honduras following Hurricane Mitch. A lifelong student, he studied the Civil Rights era extensively in his later years, and he offered classes and trips on the subject. He was preceded in death by his parents and son, Michael Byron Courtney. In addition to his wife of 52 years, Ginger, Max is survived by his sons, Ryan Courtney of Seattle, Wash., and Patrick Courtney and his wife, Kara; his beloved grandchildren, Aedan and Hannah of Des Moines, Iowa; sister and her husband, Aza Lee and Howard Griffin of Denton; nieces and their husbands, Sandra and Randy Schlotz, Norma and Marvin Crew, and Joann and Robert Callow; along with numerous grandnieces and grandnephews; brothers and their wives, Eldon and Rheta Courtney of Odessa, and Don and Patsy Courtney of Georgetown; sister-in-law, Priscilla Dickenson of Austin; brother-in-law and his wife, Randy and Susan Pye of Centennial, Colo; and many more nieces, nephews, and cousins and their families. To send flowers or a memorial gift to the family of Mr. BYRON MAX COURTNEY please visit our Sympathy Store.
To order memorial trees or send flowers to the family in memory of Mr. BYRON MAX COURTNEY, please visit our flower store.