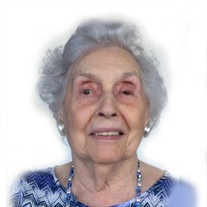 LOS ANGELES -- Cecily Kaitcer Rnov passed away Monday afternoon, February 5, 2018. Mrs. Renov was 91. SERVICE: A service at the grave will be held at 11 a.m. Friday in Ahavath Sholom Cemetery, 411 N. University Drive. Following committal prayers, she will be laid to rest next to her husband, Max, in the cemetery. MEMORIALS: The family respectfully requests that no flowers be sent. However, consideration of contributions to Congregation Ahavath Sholom or to a charity of choice, in her memory, is suggested. Born in Dublin, Ireland on January 25, 1927, the youngest of four children, Cecily was raised in Leeds, England where she met Max Renov, an American GI stationed in the U.K. during World War II. She and Max were married in Shreveport, Louisiana in 1946 and lived there while raising their two children. They moved to Fort Worth, Texas in 1991 where they became active members of Congregation Ahavath Sholom. Cecily spent the last decade of her life in Los Angeles, a stone’s throw from Canter’s Delicatessen and the Hollywood sign. A talented singer, Cecily took great pleasure in belting out the songs of the “Great American Songbook” to her very last days. SURVIVORS: In addition to her children, Shelagh Baseman and her husband, Marc, and Michael Renov and his wife, Cathy Friedman, Cecily was grandmother to Jason Berg, Collin Berg, Veronica Renov and Madeline Renov. To send flowers or a memorial gift to the family of Mrs. CECILY KAITCER RENOV please visit our Sympathy Store.
To order memorial trees or send flowers to the family in memory of Mrs. CECILY KAITCER RENOV, please visit our flower store.
Send a Sympathy Card